Features Agronomy Storage
Predicting rot can save the crop and money

Just because a disease cannot be seen on a potato does not mean it is not there. It is the unseen spores that can cause havoc in long-term storage and require early shipping or the worst-case scenario: the loss of the entire bin. What if a test could be done that would predict the potential for disease in a crop? 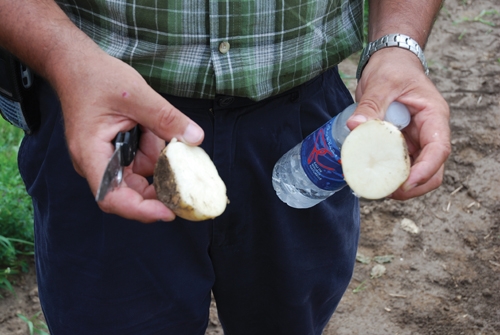 Using the Storecast system Just because a disease cannot be seen on a potato does not mean it is not there. It is the unseen spores that can cause havoc in long-term storage and require early shipping or the worst-case scenario: the loss of the entire bin.

There is such a test and it can assist growers to make management decisions regarding their crops.

Developed by researchers at the University of Wisconsin, the test can predict the level of multiple pathogens within a crop. The research was initiated after several seasons of disease-ravaged crops in the state and the resulting test is now marketed under the name Storecast by Pest Pros Inc. of Plainfield, Wisconsin. “We always do a good job of taking care of the crop in the field, but something happens in storage where the conditions are conducive to disease,” comments Dr. Zahi Atallah, who, along with Dr. Walt Stevenson, developed the test. “It’s not enough to look at disease after it has developed; growers need to pre-empt the problems. They need the ability to forecast what will happen down the road after the crop has been in storage for a few months.”

Using molecular methods, the researchers developed a means to quantify the number of pathogens present and identify them simultaneously. DNA is extracted from tubers collected to represent an entire field. The tubers are washed and then a slice is taken from each tuber to be tested. The tissue matter is juiced and combined with a fluorescent dye that increases in intensity depending on the level of the pathogen’s DNA that is present in the sample. A camera captures the fluorescence and provides a value. Then, using mathematical formulae, a prediction of storage rot potential is made. Currently, the test can assess late blight, pink rot, pythium leak, bacterial infections, Fusarium and soft rot.

It may sound complicated, but Pest Pros founder Randy Van Haren says his company took the technology developed by Drs. Stevenson and Atallah and brought it into an agricultural setting that can be accessed by potato growers. “This is a management tool that can help growers manage storage,” he says. “Clients can pull their own sample, juice it and then submit it to us for analysis. We then send them the results that tell them if the crop is at risk. It costs about as much to do this as using in-storage fungicide and, in the long run, the test could be safer because there is no product being put on the crop.”

Some growers use an in-storage fungicide as a precaution, which can be costly, but by doing a Storecast test, no fungicide may be needed or, if disease is predicted, the crop could be shipped earlier.

A potato grower in Wisconsin who has used Storecast admits he was skeptical at first, but has found it to be “very reliable.” Steve Diercks of Coloma Farms Inc in Coloma, Wisconsin, says the information gleaned from Storecast has made it possible for him to manage his storage more effectively. “We schedule harvest and storage of our fields at different times because of the information we get,” Diercks explains. “We are now trying to put some economics to it and we think we might also be able to tie it into crop insurance. Right now we can’t put a dollar value on how helpful the test is, but we know it works.”

He says the insurance angle would work similarly to getting a break on house insurance if you have a smoke alarm or security system.

Early detection, early harvest and better results
Storecast made it possible for Diercks to manage his storage without losing too much of the crop. “If you know in September or October the risk of disease is low, you know you can store longer and save that bin to ship in February,” he explains.

“There is an element to Storecast that acts as an insurance policy against losing a crop,” continues Van Haren. “We can do the test for about $11 per acre, which could be inexpensive insurance against having problems in storage.”

By identifying problems before the crop even leaves the field, Dr. Atallah suggests growers could have a strategy in place for managing them when it gets into storage. “If a grower knows there is a problem, they may choose to cool the crop quicker or ship the contents of a bin sooner,” he explains. “Or, if the problem could become severe, the crop could be shipped directly from the field.”

Diercks shares the information he receives in his Storecast report with his processor because that load may need to be processed sooner than other loads in the system.

For potato growers with large storage facilities or a staggered shipping schedule, knowing the risks of pathogens that may be present on the crop could lead to better management and a cost saving if an “at-risk” bin can be shipped prior to disease problems occurring. As Dr. Atallah suggests, the test he developed could save a crop from turning to “mush” and prevent the resulting financial loss.

From the Potaoes in Canada magazine archives.