Features
Keeping an eye on the future 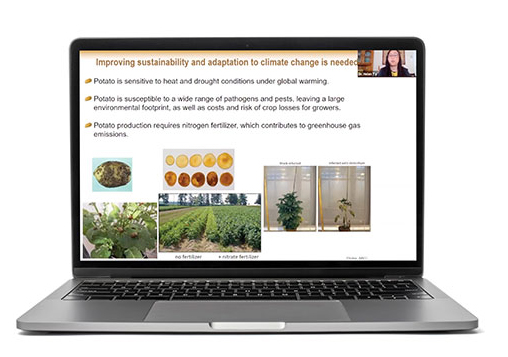 A screenshot from the virtual Canadian Potato Summit, featuring a presentation from Dr. Helen Tai, researcher with Agriculture and Agri-Food Canada in Fredericton.

The 2022 Canadian Potato Summit was broadcast virtually on Feb. 2 and featured guests from Alberta to P.E.I. Throughout the day, more than 300 viewers tuned in to gain potato insights from the space where science meets business, and where the present meets the future. UPL OpenAg served as the 2022 presenting sponsor; FCC, Gorman Controls and Syngenta were gold sponsors; BASF, Bayer Crop Science and Eco+ were silver sponsors; and Tolsma USA was a bronze sponsor.

Breeding for the future
The day opened with a keynote from Agriculture and Agri-Food Canada (AAFC) researcher Helen Tai, who had her eye set on the future – and dove deep into how breeding and improving tuber quality can help create potatoes that mitigate the effects of climate change, such as sensitivity to heat and drought.

The solution, Tai said, is new varieties that balance feasibility and desirability – which takes vast amounts of time and effort. In the AAFC’s breeding system, there are 400 parent plants that are cross-fertilized, resulting in roughly 60,000 genetically unique seeds. Those seeds are grown to form mini-tubers, which are then planted in the field. Of those 60,000, Tai explained, only 0.02 per cent makes it to evaluation, and only 0.002 per cent of the original 60,000 make it to commercial release. To put it bluntly, said Tai, “We need better variety, faster.”

DNA sequencing is necessary, because potatoes are far more genetically complicated than other crops like corn or rice. “Bad genes can get hidden, [while] good genes have a hard time getting expressed.” The good news for breeders is that DNA sequence costs have gone down significantly.”

An ideal solution would be to use marker assisted selection (MAS), which would create a map of the potato’s genetic markers, associate the potato’s traits with the markers and then use those for genetics and breeding. Tai currently leads a project on this type of genomic selection for potato breeding.

There’s also genetic transformation, although Tai noted that AAFC does not use this method. Genetic transformation involves genetic engineering of a vector in a lab to carry a new gene into the plant, which results in products commonly known to consumers as genetically modified (GM). Tai noted that there is “a lot of regulation” around genetic transformation, and that consumer acceptance is required for the commercialization of varieties using gene transformation. Changing this mindset involves emphasizing variety, Tai notes. “Some people say ‘I don’t like genetically modified foods.’ But it depends on what it’s being used for. You have to look at each one case-by-case.”

The conversation on potato breeding continued with a presentation by Erica Fava, a research assistant with AAFC’s potato breeding program in Fredericton, who provided an overview of current breeding activities across Canada. Fava explained strategies for developing new cultivars, as well as which gene expressions and traits the breeding team looks for. Since 2017, when the agency “overhauled” its breeding program, it’s used new innovations such as judging potato colours more objectively by colorimeter, versus a more subjective “eye test.”

Currently, AAFC is applying a number of new sciences in the breeding pipeline, including Tai’s genomic prediction models as well as development of imaging analysis and vigorous methods for disease screening. Current goals are to increase disease resistance, increase genetic gain, find selections that are well adapted to Canada’s climate and find traits that are desirable in the industry. But by far the most important factor in advancing potato breeds is feedback, Fava emphasized, encouraging viewers and other growers to reach out to breeders and researchers and let them know what is working.

Problematic pests
Vikram Bisht, plant pathologist with Manitoba Agriculture, offered a summary of the pests that are of the biggest concern for Canadian growers, noting Colorado potato beetle, European corn borer and aphids among the most pressing challenges.

The biggest issue when it comes to Colorado potato beetle is insecticide resistance, which is developed as a result of both repeat exposure to insecticides and the insect’s inherent genetics. This trait is being monitored across Canada. Bisht noted that European corn borer (ECB) is an “up and down” concern, and not considered a major threat in most areas, save for certain parts of Manitoba. The species spiked in numbers in 2016, and researchers have found that at low levels, it is not necessarily the tunnelling of the ECB that causes yield loss but rather injuries. When boring holes, the ECB can see parts of its limbs break off in those holes, which causes stem rot. Fortunately, Bisht said, most insecticides that work on beetles work on ECB.

Business matters
Disruption played a major part in the state of the industry panel discussion featuring Greg Donald, general manager of the P.E.I. Potato Board, Terence Hochstein, executive director of the Potato Growers of Alberta, and Shawn Brenn, chair of the Ontario Potato Board. With major concerns such as potato wart and its effects on export markets, higher input prices and continued uncertainty regarding the availability of trucks and freight, it’s proof there’s never a dull moment for potato growers.

After what Brenn called “one of the most comfortable growing seasons” in recent memory for summer 2021 (including yields 15 to 20 per cent higher than 2020), both he and Donald say growers are bracing for the most expensive crop they’ll ever plant this coming season.

Hochstein echoed the concerns, sharing that Alberta’s expected input costs will rise by 20 per cent. But it’s more than just the upfront costs, he cautioned. COVID outbreaks, which come in waves, affect the processing and packaging sector. Luckily, Hochstein noted, Alberta growers are able to pivot, because in his region there are about a half-dozen other crops to bring in the rotation.

“There have been some pivots [to] alternative crops,” he said. “We have growers saying, ‘why would I spend 20 per cent more on this particular crop?”

Brenn and Donald noted growers in their regions – particularly P.E.I. – are slightly more limited when it comes to alternate options. “There are still certain people [who] have contracts, [who] don’t have the flexibility to just say, ‘I’m gonna grow corn or soybean,’” Brenn said.

For Donald and other P.E.I. growers, the second year in a row of potato wart being detected in the province caused extreme strain. In November 2021, the Canadian Food Inspection Agency’s confirmation of potato wart in the province resulted in a temporary suspension of potato shipments to the U.S. When the same such incident occurred in December 2020, the U.S. embargo lasted for approximately three months. Donald issued a sober warning to his cross-country colleagues: “If the U.S. is permitted to close their market to a Canadian competitor, this can happen to any province in Canada… I just can’t describe or put into words the devastation this has caused.”

But the panel agreed, like many others over the last two years, potato growers have found many silver linings. Hochstein said demand continues to grow for frozen products, as does the chipping industry, with another potato chip plant opening in Alberta. Brenn and Donald also bored the innovation and high standards of safety that are common across the industry. “We have innovative, forward-thinking growers,” Brenn said.

Donald added that the various initiatives taken by the industry to ensure that foods are safe and traceable deserve to be celebrated and marketed even more. “That’s something we don’t capitalize [on] enough when we market our products. Some of the [safest] food in the world is produced in our country.”

Visit potatoesincanada.com/summit to access recordings and bonus video interviews from the event.