Potato virus Y (PVY) affects both yield and the quality of the crop, making it one of the most dangerous diseases faced by commercial potato producers. Spread by aphids and through infected seed lots, PVY has been managed with varying levels of success by Canadian growers for many years, but the rise of more aggressive and faster-spreading strains has made it even more challenging to control. 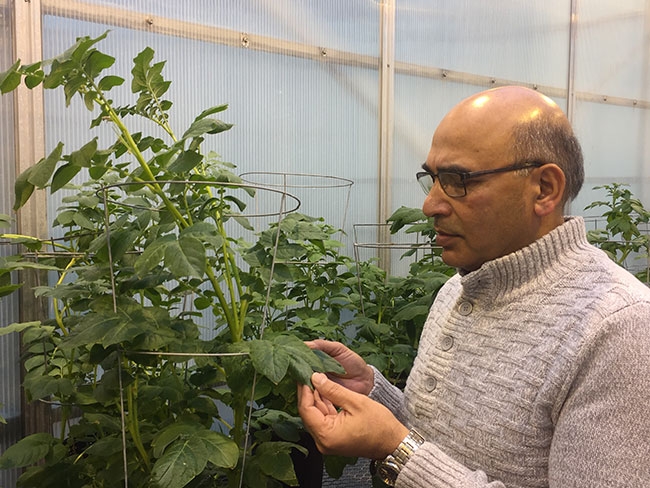 For the past five years, a major Canadian research study has been looking into developing more effective strategies for controlling PVY. The project is co-ordinated by the Canadian Horticultural Council and funded by the Canadian Agri-Science Cluster for Horticulture 2, as well as potato industry partners, and wraps up in March 2018.

Mathuresh Singh, the director of Agricultural Certification Services in Fredericton, is the project lead. Singh says the research has led to a greater understanding of new strains of PVY and their effect on commercial potato varieties. He adds it has also identified numerous science-based best management practices for reducing the disease spread on farms, which in severe cases can see yield losses due to PVY of up to 80 per cent.

There are currently three types of PVY in Canada: PVYO and two newer strains, PVYN:O/Wi and PVYNTN. Singh says the study has confirmed that the newer, more necrotic strains are displacing PVYO in several important potato-growing provinces. Necrotic symptoms can cause tubers to rot, leading to losses in both yield and quality.

The study has also catalogued the impacts of each of the PVY strains on close to 30 commercial potato varieties, including Russet Burbank, the main processing potato in Canada. According to Singh, Russet Burbank potatoes are highly susceptible to PVY but typically only show foliar symptoms.

“We have not found any tuber symptoms in Russet Burbank in any of our screens, but we did see some loss in yield,” Singh says. “The disease reduces the plant vigour, and that leads to less tuber production.”

The researchers have identified a number of commercial varieties, such as Innovator and Viking, that are less susceptible to the new strains in terms of visible symptoms and tuber yield loss. They have also found that two varieties, Eva and Musica, appear to be resistant to infection by any strain of the virus.

The research has also shown that PVYN:O/Wi and PVYNTN have a greater transmission efficiency than PVYO. Singh says the rise of PVYNTN is particularly troublesome because of its high transmission rate, as well as its ability to cause necrotic rings on tubers.
Most potato cultivars with the PVYNTN strain will exhibit mild to no foliar symptoms, he says, but in three susceptible varieties (Yukon Gold, AC Chaleur and Envol) it can cause necrotic tuber lesions or rings that can make the entire crop unmarketable.

Singh notes that the PVYNTN and PVYN:O/Wi strains exhibit distinct and typically cryptic symptoms compared to PVYO, which can make them more difficult to identify in the field. As a result, rogueing operations to manually remove infected plants from the field during the growing season are often less successful, he says, as are traditional seed certification techniques such as visual inspection during the crop growing period and winter grow-out of seed samples.

Best management practices
The study does include a number of recommendations for helping seed potato growers fight PVY by targeting the insects that carry the disease. According to Singh, PVY is transmitted by more than 50 aphid species and an abundance of aphids in potato fields has been shown to significantly increase PVY spread.

“Since the disease is spread by so many species of aphid, it’s very hard to manage,” Singh says.

The study’s best management practices for controlling disease-carrying aphids involve a combination of mineral oil and insecticide spraying that acts to minimize the on-farm spread of PVY in seed potato operations.

Under the PVY research program, different spray programs were tested through field experiments that took place in New Brunswick and Manitoba from 2014 to 2016. Results of the trials were published in the American Journal of Potato Research in 2017, and they’ve also been widely presented at numerous potato conferences and grower meetings in Canada and the U.S.

“Our trials were conducted … in two very different potato growing regions of Canada, yet the results and recommendations from them are consistent and thus should be generally applicable across the country,” Singh says.

According to Singh, frequent mineral oil spraying that starts early and continues season long, supplemented often with insecticides in a simultaneous spray, has shown the greatest potential.

“We recommend that as soon as you can see green leaves coming out of the ground, you should start protecting those plants,” Singh says. He adds if growers wait until later to begin mineral oil or insecticide applications, the disease may already be present and spreading in the field and their PVY management practices won’t be as effective.

Singh notes processing potato operations aren’t permitted to spray mineral oil, so the best defence for them is to plant certified seed that’s either PVY-free or has extremely low levels.

“The first strategy is starting with clean seed,” he says. “If there is no PVY, there is no inoculum that can spread the disease, even if you have a lot of aphids.”

According to Singh, the PVY research project has already had a significant impact within the potato industry. “It’s been very successful,” he says.

Singh notes that the mineral oil or insecticide approach advocated by the study has not only resulted in a sharp reduction in PVY in New Brunswick but has also helped producers in other provinces get a much better grip on the disease.

“I would say in general, PVY is in a declining trend,” Singh says.