Potato industry stakeholders from across the United States gathered in Bangor, Maine in November 2017 to deliberate on Dickeya, the aggressive disease that’s devastated thousands of potato acres in the U.S. since its first major outbreak in 2015. 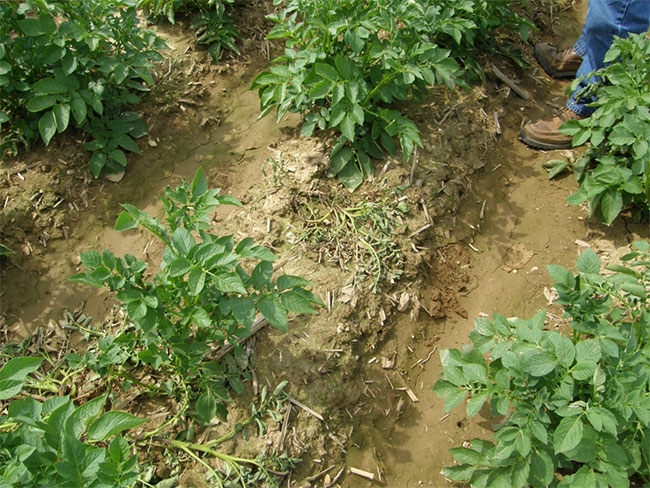 A potato plant killed by Dickeya. Potato industry stakeholders from across the United States gathered in Bangor

Sponsored by the University of Maine Cooperative Extension, the one-day summit drew more than 160 seed potato growers and buyers, research scientists, and other industry representatives, all eager to hear about the latest developments in the fight against Dickeya.

Topics covered included the current Dickeya situation in U.S. and Europe, emerging Dickeya species, the latest advances in detection of the disease, and the needs of future Dickeya research. The conference also focused on new strains of Pectobacterium, another pathogen in the blackleg complex that’s become a growing cause for concern for potato producers in the U.S.

Gary Secor, a plant pathologist from North Dakota State University (NDSU) and one of the organizers of the event, says the conference was a big success. “It exceeded all of our expectations for attendance and content,” he says.

Dickeya discussions have dominated the potato meetings circuit in both the U.S. and Canada the past couple of years as the North American potato industry looks for ways to contain the disease.

A bacterial pathogen that’s been affecting potatoes in Europe since the 1970s, Dickeya can be transmitted over long distances and across national borders through infected plant material, which can include other vegetables and some ornamental plants.

The disease is now found in numerous potato producing areas in the U.S., particularly in Maine and other states along the eastern seaboard. Because Dickeya in potatoes is primarily spread through infected seed, a growing number of seed growers and buyers are choosing to test potato seed lots for the pathogen.

Secor says the consensus among attendees at the recent Dickeya conference was that the amount of Dickeya found in seed and commercial potato fields in the U.S. appeared to be down in 2017, compared to 2016.

He believes one reason why is that as seed lot testing for Dickeya has grown more popular, it could mean fewer infected seed lots are making their way into commercial production.

Secor says his lab at NDSU found Dickeya in two Canadian potato samples, one from Ontario in 2014 and another from New Brunswick in 2016. While he hasn’t heard about any other Canadian seed lots being infected with Dickeya, Secor says that doesn’t mean growers in this country should rest easy.

“I think that certainly the potential is there for Dickeya to be present and I think the Canadian farmer should be aware of that and take it seriously,” Secor says.

Steve Johnson, a potato specialist with the University of Maine Cooperative Extension and the main organizer of November’s Dickeya summit, also confirms there has been a few Canadian samples sent to his lab that tested positive for Dickeya. “It is present in Canada.”

Agricultural Certification Services (ACS) in Fredericton began offering Dickeya testing in 2016. Mathuresh Singh, director of ACS, says most of the test requests have come from seed potato buyers in the U.S. asking for Dickeya screening for imported New Brunswick potatoes.

A potato plant killed by Dickeya.

“This year it looks like there isn’t as much pressure from [seed] buyers really to go for this testing,” he says. Singh believes fears of Dickeya making inroads into Canada have lessened somewhat, which may have contributed to fewer screening requests.

Singh also believes the present level of Dickeya in Canada does not pose a serious threat to Canadian producers right now. He says the Canadian Food Inspection Agency’s seed potato inspection program has strict tolerance for blackleg infection, which helps ensure fields are free from pathogens like Dickeya that cause the disease.

In the U.S., blackleg has not been part of the industry’s seed certification process.

Singh stresses Canadian growers still need to remain vigilant to ensure Dickeya doesn’t gain a foothold here. He says potato farmers should watch closely for symptoms of blackleg in their fields, and if it does show up, test infected plants to see if it’s Dickeya or if symptoms are caused by other, more common blackleg pathogens.

Control starts with seed
Johnson says any best management efforts to control the Dickeya must start with seed. “It’s plant pathology 101: exclusion, eradication, avoidance. You don’t plant it. If you do get it, you don’t replant the seed, and you try to avoid buying stock that had Dickeya in it. If you don’t bring Dickeya in with your seed, chances are you’re in pretty good shape.

Johnson recommends that growers select seed that’s been tested at independent laboratory and confirmed to be free of Dickeya dianthicola (the main type of Dickeya in the U.S.).

He also urges growers to choose seed from farms where the pathogen has not been detected, and which have a zero-tolerance approach to Dickeya dianthicola.

Johnson and Secor agree there’s still much to be learned about Dickeya, including determining all of the different ways it can spread. Dickeya is not a soilborne disease, and so far, seed potato tubers are the only confirmed source of the pathogen in potato crops.

“That’s one of the big questions we have: ‘where [is] Dickeya coming from, how is getting into those early generation seed lots?’” Secor says.

He points out that September marked the beginning of a four-year, $2.5 million research study into better detection methods for Dickeya and Pectobacterium and how the diseases are transmitted. Researchers will also look into developing disease resistant potato varieties as well as the economic impact of Dickeya and Pectobacterium on seed and commercial potato production in the U.S.

“We’ve got about 15 scientists from around the country all the way from Oregon to Maine involved in this project,” Secor says.

He notes that one area being scrutinized by researchers is whether things like horticultural plants, landscape materials or flower bulbs could be contributing to Dickeya’s spread. Researchers are also investigating water as another possible transmission source.

“If we can identify where its coming from then we eliminate that source, we can flush out all the infected seed lots [with testing], and eventually we’ll get back to having clean seed,” Secor says. “That’s really going to be the secret I think – getting the clean seed.”

In Canada, the ACS lab in Fredericton is examining the possibility that infected water used for irrigation or spraying could be a source for Dickeya contagion in potatoes.