Although European corn borer pressure during the early part of the 2009 growing season was less than in 2008, by the middle of last September, tell-tale broken stalks and entry holes were surprisingly commonplace in the potato fields of Prince Edward Island. “The European corn borer (ECB) has become an annual pest here over the last few years,” says Brian Beaton, potato co-ordinator with the PEI Department of Agriculture. “The pressure varies from season to season depending on the weather conditions, but most years we see some damage.” 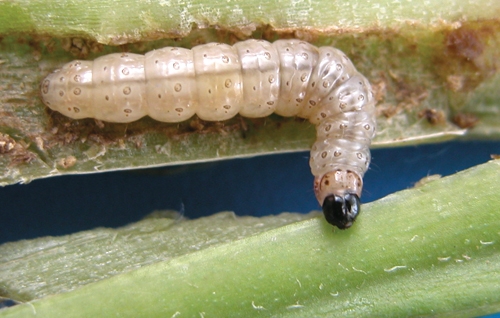 Indeed, it most likely was the weather in 2009 that allowed ECB to slip under the radar. “Because of the rain in the early summer, it seems that the period that the moths were laying eggs was extended,” Beaton says. “Some of the scouting reports had indicated a lower population than usual. But eggs being laid over a longer period of time, three to four weeks, resulted in some fields having more damage than we expected.”

After observing low numbers of eggs, many growers decided not to treat their fields, but enough eggs hatched to cause significant damage later in the season. However, with close monitoring and a solid knowledge of both the pest and pesticide options, growers can ensure they have better results in years to come. “Successful control of ECB requires a thorough understanding of the insect’s life cycle,” says Gilles Moreau, an agronomist with McCain Foods in Florenceville, New Brunswick. “It is best achieved with a well-designed integrated pest management program consisting of pheromone traps, field scouting and interventions at key points along the cycle.”

To attract male moths, the pheromone traps should be placed along the perimeter of the field in mid to late June to monitor moth flights. Moreau says once moths have been captured, scouting the fields twice a week for egg masses should begin. Egg masses are not easily seen by an untrained eye. They are flat, creamy white and layered over each other, giving the appearance of fish scales on the plant stems or leaves. As egg masses get ready to hatch, they turn black.

Moreau stresses that egg masses are not the only thing growers need to be aware of. “Finding two to three egg masses per group of 10 plants may be a good threshold for spraying, but factors such as crop health, presence of other pests and environmental conditions must be carefully considered in the decision as well,” he says. “These concerns can all affect whether or not egg masses develop and produce larvae. They don’t all necessarily do so.”

This is why continued scouting throughout the egg-laying and hatching periods is so important, says Moreau, and should include hunting for entry holes. Moreau says that those who successfully controlled the insect and did not suffer yield loss scouted fields regularly in 2009. They noted the number of egg masses, monitored their development and tracked the viability of newly hatched larvae.

Moreau also advises farmers to consider burning or plowing the dry stalks in the fall or early spring, as this will disrupt the life-cycle of the insect and possibly lead to significant mortality.

Spray considerations
While it is best to spray most insecticides at peak ECB egg hatch before the neonates bore into the stem, the pest’s sometimes drawn-out laying behaviour can mean it has no peak hatching point to speak of.

Dr. Robert Coffin, a research scientist with Cavendish Farms in Dieppe, New Brunswick, says that is why an insecticide effective at multiple stages of the ECB life cycle is so very useful. “An ovicidal insecticide doesn’t have to be sprayed just when larvae are hatching,” he explains. Unlike most insecticides, Coragen kills both ECB larvae in the eggs and larvae after hatch. It is in a new chemical class with a new mode of action (Group 28, anthranilic diamide). “It’s also very important that products have good residual action,” says Coffin. “If growers are using a product that will only last for a short time, they have to worry a lot more about pinpointing exactly when it’s best to spray.”

Blair Fraser, a sales representative with DuPont, says the spray’s active ingredient moves into the leaf and stays in the leaf tissue where it is protected from wash-off and can be ingested by pests. It also stays on the stem, so if the larvae begin to burrow into the stem they ingest additional active ingredient.

Beaton observes that Coragen performed well again in 2009. “It has a longer residual control period for ECB than some products,” he says, “and that makes the window to apply the product larger, and should provide better control.”
Grower Kevin Hunter, along with his brother Donald and father Carl, farms 850 acres of processing potatoes, mostly Russet Burbanks and Shepody with some Ranger Russets, plus 100 acres of seed potatoes in Kensington, Prince Edward Island. “In our opinion, Coragen has the longest period of activity,” he says, “which allows us to go in a day or two earlier than with other products. With our current acreage, this is really important, because it takes about four days to spray it all even if the conditions are continually favourable.”

Hunter has an experienced employee who scouts about a third of his acreage for ECB. “There’s a knack to finding the eggs,” says Kevin. “They’re often on the borders of the fields and in sheltered areas. If they’ve already laid on the borders, they’re probably laying in the middle of the fields, but if you go ahead and spray with Coragen, its residual activity takes care of all of it.”

“I’ve heard generally very positive results from farmers,” says Coffin. “Some people tried spraying twice, but once seems to give the suppression.”

Hunter sprays once, which he says helps them comply with the “stringent environmental laws” on PEI. “Having an effective product with a longer residual means you use less and use only one chemical,” he explains.