News
Sharing with the world

Agriculture and Agri-Food Canada’s Potato Research Centre (PRC) in Fredericton, N.B., marked its 100th anniversary in 2012. However, from the perspective of collaboration opportunities, 2012 was a typical year. In February, the centre hosted a Bolivian research delegation. In March, two Latvian potato specialists visited, one of them being Dr. Ilze Skrabule, a potato breeder and head of the scientific board of the State Priekuli Plant Breeding Institute in Priekuli. Throughout the year, French scientists worked with those at PRC on insect resistance at the Centre’s field plots in Benton Ridge, and a French student is currently doing graduate work at the Centre.

PRC potato geneticist Dr. David De Koeyer spent 11 months at the International Potato Centre in Lima, Peru, looking at how the genetics of potatoes in the high mountains of the South American country can bring benefits to Canadian growers. “Several other scientists also took time to collaborate internationally during the last few years,” says PRC research and development director Dr. Claudel Lemieux. “Dr. Helen Tai went on a four-month work transfer in New Zealand to learn new applied genomics techniques and apply this knowledge to her own work, and Dr. Yvan Pelletier travelled to France as part of an ongoing research project between Agriculture and Agri-Food Canada (AAFC) and ‘Comit Nord,’ which is a French potato research organization.”

Collaborative projects develop as a function of how priorities and projects evolve and they are subject to budget availability and other constraints. “As a consequence, the timing of collaborative visits here by those from abroad or outgoing visitation is variable by nature,” Lemieux explains. “However, and even though we don’t necessarily keep this kind of statistics, I would say the amount of visiting scientists, outgoing visitation and collaboration, has been fairly steady over the last decade or so.”

PRC research visitors fall into two broad categories: short-term visitors who come for a few hours or a few days and collaborating visitors. “The collaborators usually come to conduct some work as part of an existing project and their stays can be short term or long term,” says Lemieux. For example, Dr. Danielle Donnelly, a professor at McGill University, is currently spending her sabbatical year in Dr. Xiu-Quing Li’s lab; Dr. Jeanne Jacobs, a potato researcher from Plant and Food Research in New Zealand, visited PRC in early January. “The types of collaboration are highly variable,” Lemieux adds, “and can include working on a joint publication, conducting field or lab experimentation, contributing to the analysis of a series of experiments, co-supervision of foreign or domestic graduate students, or even spending sabbatical time at the PRC.” In virtually all cases, he adds, these visitors are supported by their home organization.

International visitation and collaboration is about raising the game of all researchers: it allows them to see things in new ways, demonstrate or learn about techniques and technology, get inspired and refreshed, share ideas, and more. “AAFC scientists are part of the broader international science community, publishing their results in international journals, attending conferences and interacting with members in other ways,” notes Lemieux. “Those who have chosen science as a career are naturally curious and inventive, and when they have ideas, they often realize they cannot develop them in full if they work in isolation.” He notes this is especially true in the complex sector of “live” science. “Scientists realize they can only fully develop the potential of their ideas if they work in relationships with others, merging disciplines and bridging resources,” says Lemieux. “I believe this is the most important aspects of collaborative work and networking at the scientific level: this capacity to leverage expertise and resources from other disciplines and organizations to achieve common goals.”

Lemieux notes that the type of collaboration evolves differently in every case. “It is next to impossible to force-fit collaboration among individuals, and scientists are no different,” he says. “We can provide conditions to facilitate all kinds of networking and collaborative work.”

Moving forward
While protocols for the types of visitation to PRC or from PRC, when visits occur, how long they last and what will be accomplished during the visit are all developing on an ongoing basis, there are many plans firmly in place. In PRC’s short-term future, for example, Donnelly will complete her sabbatical year, and there is a planned visit by Pelletier and Dr. Claudia Goyer to ‘Comit Nord’ in order to present recent research findings and discuss potential longer-term collaborations.

“There really is a sense that we are an international community,” says De Koeyer. “As scientists, we believe we can learn from each other and help our own farmers in that way.” However, there is also a shared desire to use potato research advances to help fight global hunger. “I went to the Andes regions of Peru and met farmers who only want to be able to feed their families,” he said. “The work we can do to make the production of potatoes more economical and the potato itself more nutritious will help people around the world.”

Lemieux believes that the PRC is a natural place for collaboration to occur. “This Centre’s world-class researchers and innovative work in potato breeding as well as the environmental side of potato production has attracted global attention for a long time,” he notes, “and that will continue.” 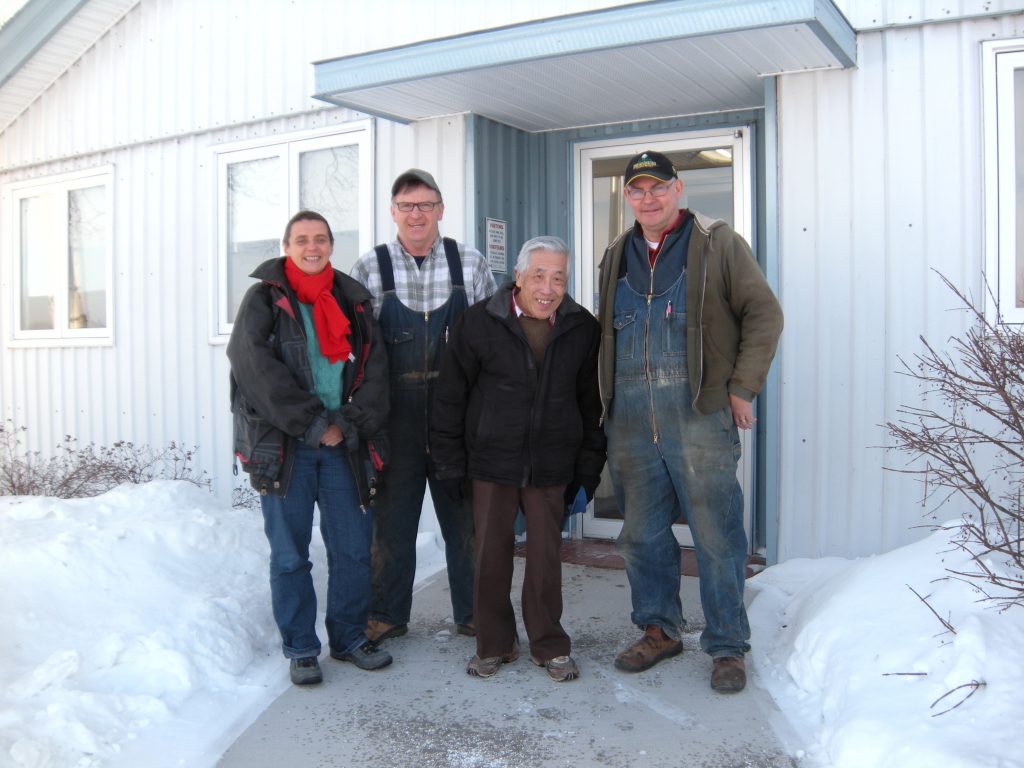