Every year, Potato Days is a three-day event where Dutch potato-breeding companies, and a few companies from Germany and Denmark, showcase new potato varieties. The event took place from Nov. 7 to 9 and was held in the Emmeloord-Joure areas of Friesland. 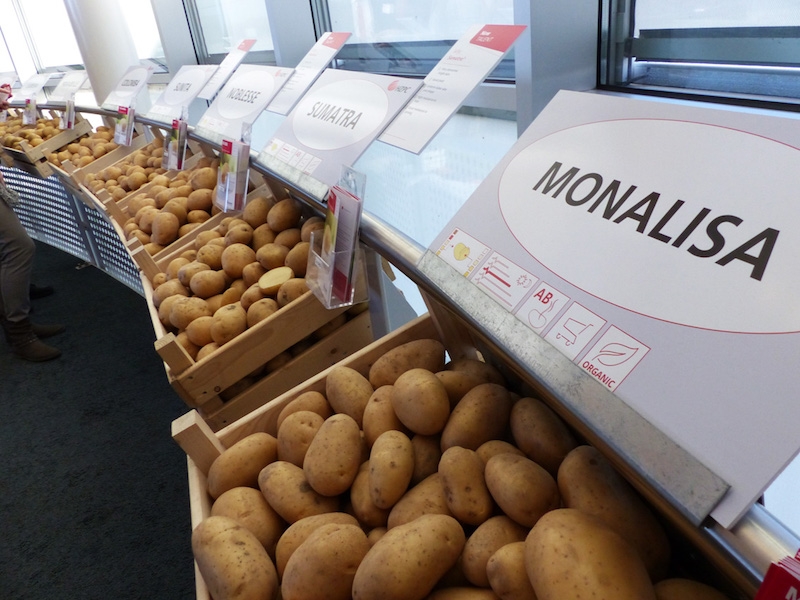 Tuber samples are on display, and there are brochures with information on agronomy, tuber quality and pest resistance. Eugenia Banks, potato specialist with the Ontario Potato Board, attended this event and remarked that it was the first time at the event that she saw second growth on some varieties as a result of the unusually hot dry summer in 2018.

The two largest breeding companies in The Netherlands are Agrico, based in Emmeloord, and HZPC, based in Joure. HZPC is the largest producer of seed potatoes in Europe and its CEO, Gerard Backx, spoke of the impact of the hot dry summer across Europe this year. Despite spreading seed production over six countries, seed volumes were down by 20 per cent. At the event, he said that customers might not be able to get the varieties they expect to grow in 2019 due to the shortage of seed.

One of the Agrico fresh market varieties that caught the attention of many attendees was Constance, according to Banks. This past season, Banks evaluated the variety Constance at Brenn-B Farms near Hamilton, Ont. and at the Tupling Farms variety trials where it performed very well.

The market for fresh-cut fries seem to be increasing, and Banks remarks that Agrico had many varieties that looked very promising. Bridget, a new variety showcased by Agrico, performed well in Ontario in 2017 and 2018. Despite the impressive chip samples on display, there is yet a European chipping variety that performs just as well in Ontario.

At the German potato breeder Norika open house, there were many specialty varieties. One of them was the yellow-fleshed Goldmarie with long, medium-sized, attractive tubers and above average culinary traits. Banks says Goldmarie performed very well at the Tupling Farms variety trial in 2018. Alegria, a table and fresh-cut fry variety that Banks previously evaluated, was also showcased. Banks says Alegria is resistant to scab and produces attractive tubers, but it did not catch the attention of Ontario growers in the 2012-2013 variety trials. However, it is recently getting a lot of good reviews from the U.S. and Banks plans to have a second look at it in 2019.

For the HZPC display in Joure, tubers were placed in crates distributed over three floors around the atrium of the HZPC building. More than 100 varieties were showcased including processing (chips and French fries), fresh market, specialty, creamers and organic potatoes.