Features Agronomy Soil
Pulp and paper and potatoes: a match made in New Brunswick 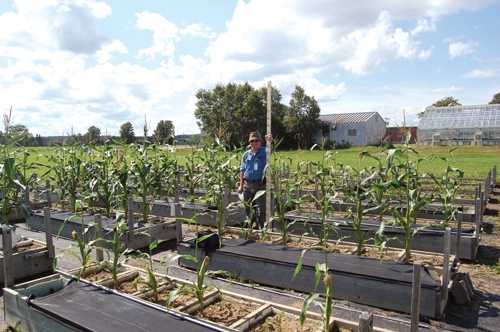 In this era of climate change, decreasing oil availability and rising energy costs, he is not alone. Residues from a multitude of activities including crop farming, logging, sawmilling and even poultry production are being converted into a host of valuable products, from bio-oil and cellulosic ethanol to heat and electricity.

For more than a decade at the Agriculture and Agri-food Canada Potato Research Centre in Fredericton, New Brunswick, Fahmy has studied the effects of using pulp and paper industry residuals as soil amendments, and has returned some exciting results. During four three-year cycles of growing legumes, potatoes and grain, Fahmy has observed improved soil-water retention and nutrient content, reduced soil erosion and nutrients leaching, and increased crop yields. “Diverting these residues also means the lifespan of landfills is extended,” he says, “and the methane that would have been emitted from these compounds as they break down is avoided.”

The two soil amendments are raw pulp fibre residuals (PFR) and its compost (CPFR), both of which meet the quality guidelines of the Composting Council of Canada. “PFR is the very short cellulose fibres floating in the pulp and paper mill effluent after processing wood chips,” Fahmy explains. “These fibres are flocculated using a resin and precipitated in huge holding tanks, then removed and reduced in moisture content before disposal.”

The nugget-like residue is then used “as is” (raw PFR) or used as an ingredient in a compost formula to make a value-added product (CPFR). The nuggets act as reservoirs for water and dissolved nutrients in the soil.
The study’s first three-year rotation involved growing clover, barley and potatoes in soil containing raw PFR. The second rotation featured field peas, corn and potatoes in soil with CPFR, and the third rotation involved field peas, corn and potato, in soil which again contained raw PFR. The fourth rotation, which ends in March 2011, is being conducted with organic agriculture conditions. Fahmy used both rain-fed trial plots and rain-fed plots with supplemental irrigation.

In general, the overall results of the first two rotations show that moisture content of treated soils was boosted by five to 10 percent, and runoff initiation occurred at a point two times longer than the control. “Our research team also found a 23 percent reduction in runoff and a 71 percent reduction in soil loss due to runoff,” notes Fahmy. “This is especially important to growers in highland areas such as the potato-growing belt around Grand Falls, New Brunswick, which are susceptible to erosion.”

The residues also increased the bio-availability of N, P and K.

Market potential
While Fahmy firmly believes that the potential domestic and foreign markets for soil amendments from the pulp and paper industry are large, he sees a number of milestones that must be reached before that potential can be realized.
The first task, he says, is to expand the scope of the trials. “The research has been carried out in small plots, and must now be conducted at the field level on a demonstrative farm setting within the agricultural production community,” he notes. “This will be done next when funding is secured.”

Fahmy would also like to see a large one-year international field demonstration study in a country with different environmental and climatic conditions than Canada. “Testing the amendments under different precipitation and growing conditions would be ideal in helping to confirm the beneficial gains to farmers here and elsewhere,” he says. “It would also show the world that Agriculture and Agri-Food Canada is concerned about the environment and is working to achieve an environmentally sustainable agriculture industry.”

A small study of the local market for these soil amendments was carried out by a senior class at the University of New Brunswick’s Saint John campus. “It was helpful but not elaborate enough,” Fahmy says. “A professional market study as well as a commercialization study needs to be carried out locally, nationally and internationally. It must address such factors as how best to educate growers on the use of the amendments and the cost of transporting them.”
Once these steps are taken, the Government of Canada, perhaps through the Canadian International Development Agency (CIDA), would be in a good position to promote the use of these types of soil amendment locally and internationally, especially where soils are low in organic matter and water conservation is critical. “The marketing of this product to Canada and the world is of great importance,” says Fahmy. “It will improve the environment by recycling the residue into the soil instead of sending it to landfills. This, in turn, will help in reducing global climate change. I believe we do not own the land, but we borrow it from our children.” n