Best practices for potato storage begins with disease prevention in the field and good agronomics. Although practices and disease concerns may have changed over time, the basic principles of managing potato production and storage haven’t changed much.

“Whatever is happening in the field is going to have an impact on storage,” Eugenia Banks, potato specialist with the Ontario Ministry of Agriculture, Food and Rural Affairs (OMAFRA) in Guelph, Ont., says. “If the crop is growing well, not stressed and harvested two weeks after killing the top growth, and the potatoes are mature with adequate skin set and no bruising, then everything should go really well. However, Mother Nature doesn’t always help, and wet conditions at harvest is bad for diseases such as late blight or pink rot and others. I think the expression ‘potato storage is not a hospital’ is great advice, as whatever goes into storage is not going to get better.”

Over the past several decades, potato production has seen a lot of changes. According to Lawrence Kawchuk, research scientist with Agriculture and Agri-Food Canada (AAFC) in Lethbridge, Alta., three big changes are pesticide resistance, the emergence of new diseases and the re-emergence of old diseases.

“Pesticide resistance remains an issue as pathogens such as Fusarium continue to develop resistance. There are also market sensitivities to pesticides and a growing interest in moving away from their use, and reducing economic and other trade costs,” he says. Also, one of the new devastating diseases of concern is zebra chip, “which has been found in Idaho and Washington, but so far monitoring programs have not yet identified the disease in Canada.”

Kawchuk says the re-emergence of late blight, a historic disease of potatoes, is due to a variety of changes, including new strains. “A lot of resources have been allocated to monitoring changes in the late blight population and helping growers respond to keep it at low levels and protect potatoes in storage,” he notes. “In the last couple of years, backyard garden tomatoes have been identified as the primary source of late blight in Canada and the U.S.”

Strategies to reduce the risk of late blight include encouraging gardeners to select resistant tomato varieties and quickly remove and dispose of any diseased plants. If the disease is not controlled, it will contaminate neighbouring fields downwind. Indeed, there is evidence of the pathogen moving 30 to 50 kilometres in the air in a single day, and perhaps more under very windy conditions.

According to Banks, an integrated pest management (IPM) program continues to be a best management practice for growers for disease prevention, including field monitoring, adequate soil moisture and fertilization, and timely application of crop protection products. “Rotation of chemical products is an important part of an IPM program, particularly to address resistance concerns, [as] Fusarium has developed different degrees of resistance to most of the chemicals currently registered for control,” she notes. “As well, storage diseases including Fusarium, late blight, soft rot, pythium leak and pink rot continue to be management issues for growers. However, there are various phosphorous acid products registered as a post harvest treatment to control late blight when potatoes go into storage. Several foliar applied fungicides for late blight and other diseases are available, and there is a new biopesticide registered, Serenade SOIL, for in-furrow application for suppression of pythium leak, pink rot, rhizoctonia, silver scurf and Fusarium dry rot.” Serenade SOIL applied as a post-harvest treatment may reduce silver scurf in storage.”

Potatoes are produced for various markets, and some potatoes are harvested during the summer and processed immediately into French fries or chips, or packaged and sent to markets and retail stores. Some potato production includes varieties that are grown later into the fall and stored for a longer duration in large temperature-controlled storage buildings.

“I’ve been working on potatoes for decades and continue to be amazed at the advancements in potato storage,” Kawchuk says. “Growers can now store high-quality potatoes for several months, and still have good quality products for the market 10 or 11 months later. Quality is everything to the market today, as the potato market is quite saturated.”

Advancements in handling and storage
Growers today have access to various technologies to protect healthy potatoes going into storage and over the long term. Advanced technologies for controlling ventilation, relative humidity, temperature and other factors are available. Many technologies can be managed remotely from computers and smart phones, helping growers easily monitor storage conditions.

“There is a wide range of advanced technologies and equipment available, but the number one priority of all new storage technologies and facilities today is to save energy,” Banks explains. “One of the new field technologies that is proving to be very useful is the Impact Recording Device (IRD), which helps detect where in the harvesting and handling process potatoes suffer bruising. The device is the shape of a potato and as it passes through the harvesting, conveyors, transportation and handling processes, it records where impacts and bruising are occurring.”

She adds eliminating bruising is key to reducing the incidence of serious diseases such as Fusarium dry rot and soft rot. Fusarium, which is a difficult pathogen to control, is always ready to penetrate potatoes if they have bruises or wounds, and then soft rot will follow, attacking potatoes infected with Fusarium. The device costs about $5000, but it pays off and helps growers optimize their system quickly to prevent bruising. The device is available through Techmark Inc. based in Michigan, which also carries a wide range of potato storage technology, equipment and devices.

Potato breeding and varietal development advancements continue to focus on bruising and disease resistance to improve potato quality and storage. The Potato Research Centre in Fredericton, N.B. holds the Canadian Potato Genetic Resources germplasm collection and leads some of the variety development in Canada.

“There are new varieties being released constantly with improved traits,” Banks says. “For example, Simplot in the U.S. recently received USDA approval for the release of Innate varieties, which are improved versions of existing potato varieties created through a proprietary biotechnology process called Innate.” Innate potatoes contain genes from wild and cultivated potatoes. According to Simplot, these potatoes pose no environmental risk, create no harm to other species, and grow just like conventional potatoes in extensive field tests. The first generation of Innate potatoes includes Russet Burbank, Ranger Russet and Atlantic. They are tolerant to black spot bruising and pressure bruising, and they produce less acrylamide after frying. Simplot expects to soon add resistance to late blight.

“Another similar technology, Cisgenesis, uses natural genes (cisgenes) from wild potatoes, and is being used to improve disease resistance in plant breeding,” Banks adds. “However, questions remain whether or not these potatoes are going to be accepted by growers and consumers. The technology is there to offer good improvements, but the consumer also has to be considered.”

Some of the new varieties have improved cold tolerance and can be kept in storage longer. This impacts sugar content and issues with French fry and chip quality, including discoloration when fried.

“Another emphasis is on the development of varieties resistant to common scab, one of the main production problems in Ontario and Quebec,” Banks says. “The use of resistant varieties is the only reliable control method. A new scab resistant variety, Whitney, was recently released, and hopefully we will have more resistant varieties in the years to come. However, the breeding process is not easy, and it usually takes plant breeders 10 to 12 years to develop, evaluate and release a new commercial potato variety.”

“This is a very exciting time for the potato industry,” Kawchuk adds. “If we can keep inputs on the lower side as we have traditionally, and with continued advancements in varieties, technology and storage enhancements, markets will continue to expand. There are huge opportunities opening up in Asian-Pacific markets, with over 50 per cent of Alberta potatoes, for example, currently being shipped offshore.”

Kawchuk says advanced plant breeding techniques using molecular approaches will become more commonplace in the next five to 10 years. “Science has been completely revolutionized with low-cost genome sequencing and the understanding of how genes function. This is a real game-changer and has the potential to eliminate the use of pesticides in the future. These new advancements will allow growers to produce healthier products on a consistent basis by eliminating disease, improving storage quality and increasing access to new markets in the future.”

Fifteen years ago, “The future of fighting disease in storage” was published in a special edition of Potatoes in Canada, a sister publication to Top Crop Manager magazine. The story highlighted several new research projects that were underway at the time, which could potentially help growers maintain crop health in the field and in storage.

Some of the research projects highlighted in that story, such as biological controls and new varietal development, are still underway today. And what was a concern 15 years ago, namely the risk of fungicide resistance, remains a management issue for growers today. Then, like now, growers are encouraged to rotate between products with different modes of action. 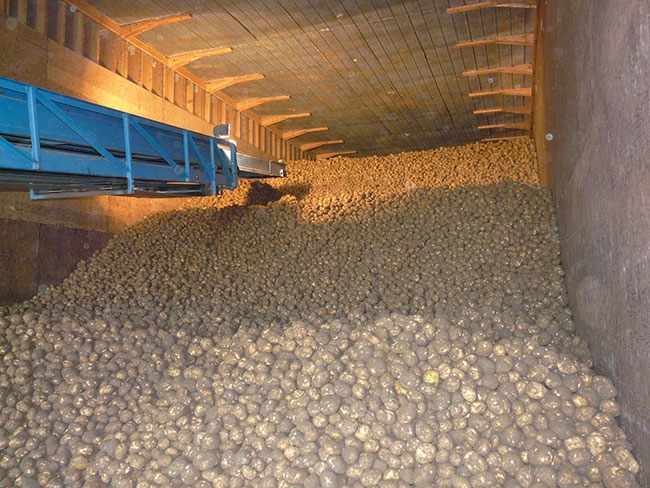 Potatoes entering a storage facility at Allison Best practices for potato storage begins with disease prevention in the field and good agronomics.
Print this page