The results from Ontario spore traps are negative for late blight in Alliston, Shelburne and Simcoe-Delhi areas as of July 31, according to Eugenia Banks’ latest potato update. 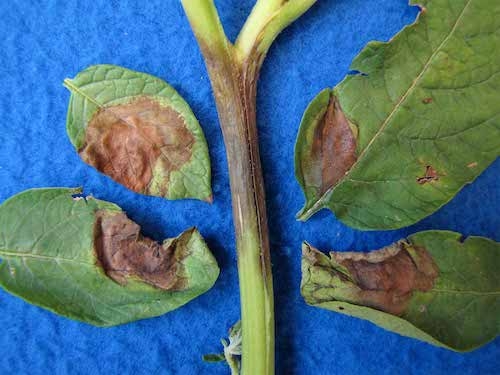 P. nicotainae stem infections can be confused for late blight

Throughout the month of July, spore traps in Ontario consistently reported negative results. No spores of late blight were detected. The hotter and drier weather could be keeping late blight at bay, but recent cooler nights and sporadic rain in the region may create conditions for blight development.

Crops become more susceptible to early blight, brown spot, Verticillium and Fusarium wilt in fields that are, or will be, past bloom. Last week, at the end of July, black cutworm was found in a field in Delhi, Ont.

Despite negative results for late blight, potato specialist Banks says Phythophtora nicotianae (P. nicotianae), a cousin of late blight, still thrives in hot weather. The leaf and stem infections of this disease are easily confused with late blight, but the pathogen sporulates differently. To diagnose P. nicotianae, Banks advises one place suspicious samples in plastic bags with adequate moisture and incubate them overnight at room temperature. If no white mycelium (thread-like fungus) develops, there is a high probability it is P. nicotianae.

P. nicotianae can also infect tubers, where the flesh of the infected tuber will usually turn tan or brown when exposed to air. However, the susceptibility of infection varies with variety.

P. nicotainae stem infections can be confused for late blight