As is often the case, there’s good news and bad news to report on the potato disease front in 2012. 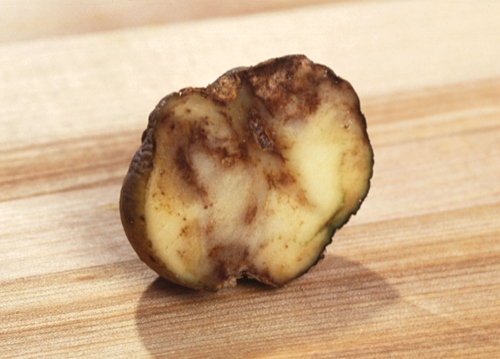 While resistance to fungicides, disease incidence and the number of pathogen strains being detected in Canada have all grown, a new national analysis initiative and a new testing lab are now in place. “Late blight (caused by Phytophthora infestans) incidence became more widespread in 2011 in Canada in both potatoes and tomatoes,” says Dr. Rick Peters, a potato disease scientist at the Agriculture and Agri-Food Canada (AAFC) Crops and Livestock Research Centre in Charlottetown, Prince Edward Island. “We’re also finding new strains of the pathogen in different locations across the country, which is very alarming.” Peters says there are at least five strains in Canada right now, compared to the traditional long-term scenario of one main strain known as US-8 up until two years ago.

Dr. Khalil Al-Mughrabi says long-distance movement in seed tubers and garden centre transplants has been a large contributing factor in the rapid spread of new genotypes across Canada. “Genotype US-23, which was previously detected only in the United States, has come to dominate in British Columbia, Alberta, Saskatchewan and Manitoba,” notes the plant pathologist with the Department of Agriculture, Aquaculture and Fisheries’ Potato Development Centre in New Brunswick and adjunct professor at Dalhousie University and the Nova Scotia Agricultural College.

“Although US-23 infects both potato and tomato, it was more aggressive on tomato and was the only genotype recovered from commercial garden centres.” In 2010, US-8 was dominant throughout Canada and was the only genotype detected in isolates from New Brunswick and Prince Edward Island. That year, other genotypes detected in Canada included US-11 in Alberta, US-24 in Manitoba, and US-22 in Ontario. “In 2011, we saw US-23
and US-24 in eastern Canada,” adds Al-Mughrabi, “most likely as a result of acquiring infected seed potatoes from
western provinces.”

Genotype US-8 is still the most aggressive and common strain in Prince Edward Island, says Peters, but it is now showing resistance to Ridomil, a fungicide that has been available for 10 years. “However, some new strains are showing a
greater sensitivity to it,” he notes. “Each strain is different.”

In 2011 came the establishment of a much-needed cross-country network for characterizing strains of late blight, the National Potato Late Blight Working Group. “For the first time, we have a co-ordinated national strain identification and analysis program.”