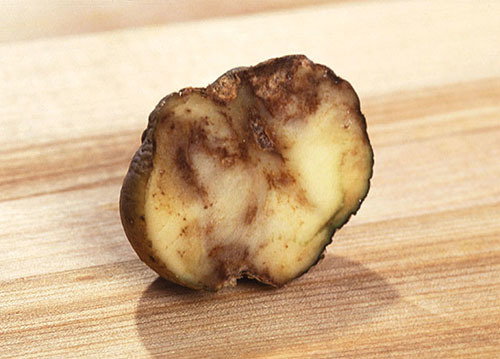 Descendants of the fungus-like pathogen that caused the Irish potato famine in the 1840s – Phytopthora infestans – may have had a “helping hand” in recent U.S. outbreaks of the costly blight disease.

Reporting in the September 2019 issue of Virus Research, a team of Agricultural Research Service (ARS), Cornell University (CU) and Rutgers University scientists announced they had identified a virus that infects P. infestans and appears to increase the pathogen’s ability to cause the disease, known fully as “late blight.” Late blight attacks on tomato and potato crops worldwide inflict more than $6.7 billion annually in yield losses and control costs.

Historically, late blight researchers focused their attention on studying the pathogen’s virulence, disease cycle, host plant responses, capacity to resist fungicide and the environmental factors that favor it. However, little attention has been paid to a virus called PiRV-2 known to reside in some late blight strains including US-8. The latter was first detected in New York in 1992 and four years later had spread to other potato-producing states and parts of Canada.

In collaboration with William Fry and Bradley Hillman, with CU and Rutgers, respectively, Cai used molecular methods to detect for the virus in 73 samples (or “isolates”) of late blight collected from North America, Mexico, The Netherlands, Estonia and South Africa.

They also used high-throughput sequencing and mapping techniques to identify late blight genes that were either “up-” or “down-regulated” by the virus, finding 848 of them. Up- or down- regulation of genes refers to their role in either increasing or decreasing cellular activity (like making proteins) in response to external stimuli—in this case, PiRV-2.

Based on their analysis, the researchers found PiRV-2 in 11 of 13 (85 per cent) isolates of US-8 and three of four isolates of another common North American lineage, US-22. PiRV-2 was harder to find in late blight isolates from the other countries, including Mexico, the pathogen’s center of origin and greatest source of genetic diversity.

The researchers also conducted a series of petri dish experiments using potato leaves from a susceptible variety to compare the virulence of late blight with and without PiRV-2, determining that cultures of the pathogen with the virus produced nine to 125 times more spores and caused larger lesions on the leaves.

“The number of spores produced by a late blight lesion is an important factor in late blight epidemics,” Cai explained. “More spores could lead to more transmission and infection”—a boon, in turn, to the virus’s own survival and spread.

PiRV-2’s prevalence in the majority of US-8 late blight isolates tested suggests it could have contributed to the lineage’s dominance and persistence in U.S. potato and tomato crops compared to others that have come and gone since being introduced in the late-1980s.

Further study is needed to determine how prevalent the virus is among all populations of late blight worldwide, and whether this holds any implications for new ways to control the disease or to predict its severity in crops.