With the help of DNA sequencing, Canadian researchers are linking soil microbial communities to soil health and potato yields. This research is the first stage in eventually developing a tool to diagnose the health of potato fields and to help identify management practices to improve tuber yields and quality. 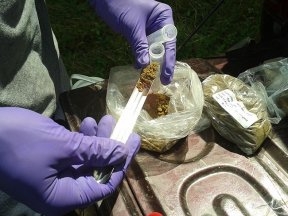 Researchers are collecting soil samples for microbial community analyses to determine how these communities are related to soil properties and potato yields. With the help of DNA sequencing

Zebarth and Claudia Goyer, a molecular bacteriologist with AAFC, are collaborating on this research, which is funded by Potatoes New Brunswick, McCain Foods Canada, PEI Potato Board, Manitoba Horticulture Productivity Enhancement Centre Inc. and AAFC.

Their research is part of a major, industry-led initiative to determine how to overcome limitations to productivity in Canadian potato fields. A key aspect of this multi-component, five-year initiative is to understand and address in-field variability in the growth and yield of potato crops. “As part of this initiative, we wanted to develop different tools, including this work to look at using microbial communities as a tool for assessing soil health,” Zebarth says.

“Ideally, [with such a tool] you would be able to analyze a microbial sample from a field, and the results would tell you if the field is healthy or unhealthy, or somewhere in between. And maybe knowing the nature of the microbial community might tell us how to intervene – if you have this kind of community, then you need this kind of practice to improve it. So that’s our long-term goal, but we’re still really early on in the process.”

Next-generation sequencing
Goyer explains advances in DNA-related technologies have made this research feasible. Over the past 10 or 15 years, the cost of DNA sequencing has plunged. At the same time, the power of the technologies, including the capacity to handle massive amounts of data, has shot up.

“For microbiology these days, it’s really an exciting time. It’s a revolution,” she says. “With a new technique called next-generation sequencing, it has become much easier to look at microbes in soil. That is opening a lot of new research avenues.”

As an example, information on the soil microbial community could help in controlling a soil-borne disease. Any pathogen is part of a larger soil microbial community with many different organisms and complex interrelationships between the organisms. Some of those organisms might increase the target pathogen’s impact on the crop by creating an opening for the pathogen to attack. But others might outcompete that pathogen for positions on the roots of the crop, while others might counteract the pathogen’s effects on the crop because they perform functions for the crop plants, like producing phytohormones that enhance plant growth and yield, triggering the plants’ defence mechanisms against the pathogen, or making nutrients available to the plants.

“So sometimes when we use an agricultural practice to control a disease, we don’t always know why it is working or not working in certain fields,” Goyer says. “But with next-generation sequencing, we are finally able to know which microbes are there. And once we understand what is there and why it’s there, and whether it is associated with yield or not, then we can make progress in terms of making microbial communities work for us.”

In this current research, Goyer is using a method of next-generation sequencing called amplicon-based metagenomics that focuses on just the bacterial and fungal communities and allows the research team to analyze a lot of samples at a reasonable cost. The disadvantage of this method is that it cannot identify organisms to the species level, which would be necessary if you want to find out whether a particular pathogen is present. However, it is possible to do an additional test, like quantitative or digital polymerase chain reaction (PCR), to see if a specific pathogen is there.

Microbes and landscape
For this research, Zebarth and Goyer are conducting a series of studies. The first study, conducted in 2014, involved sampling along a 1,100-metre transect in a commercial potato field in New Brunswick. They wanted to see how the soil microbial communities varied across the landscape and whether those variations were related to changes in soil properties and topography.

The research team collected soil samples at 83 points along the transect, sampling at the upper-, mid- and lower-slope positions on the hills and depressions of the field’s rolling landscape. They analyzed the samples for the bacterial and fungal communities and for key soil properties including texture, moisture, pH, organic carbon and total nitrogen.

Soil pH was quite variable in this field, ranging from 4.3 to 7.0. “We found that the steeper the slope, the lower the soil pH. We believe that is because of erosion. Our subsoil is acidic and with more erosion, you remove more of the surface soil, exposing the acidic subsoil,” Zebarth explains.

The researchers found soil pH was the most important factor influencing the changes in the bacterial community’s diversity across the landscape. The community tended to be more diverse when the pH was close to neutral and less diverse when the soil was acidic. Organic carbon levels also had some influence on bacterial communities, with higher carbon levels associated with greater diversity.

Fungal community diversity was influenced by organic carbon levels, but not by pH.

The treatments were applied in the fall of 2015. Soil samples were collected that fall, and then in the following spring before planting potatoes, during the growing season and after harvest, to find out how the microbial communities changed over time and how the communities were related to tuber yield and quality.

The preliminary results for this study show the compost treatments initially had a very big impact on the microbial communities. Over the course of the year, those communities gradually became more similar to the community in the control treatment.

The composted curbside waste had the longest lasting effect on the microbial community. Goyer thinks this has to do with the quality and amount of organic carbon in household wastes. “These wastes are much easier and faster to decompose, resulting in different kinds of compounds in the compost. This composition seemed to stimulate more development of a more varied microbial community compared to the other treatments.”

According to Zebarth, it makes sense that the microbial communities would eventually return to something close to their original condition. “The soil has a huge pool of organic matter. By adding some organic matter, we can influence it, but it is such a large pool to begin with that you would expect it to have a certain amount of stability.”

Microbes and fumigation
In another study, the researchers are comparing fumigation using Vapam to no fumigation. In the fall of 2015, the replicated treatments were applied to large-scale strips in a commercial field in Manitoba. Each strip has several sampling points along it.

Microbes and spatial variability
Goyer and Zebarth will be starting yet another study in 2017 to see if they can link the microbial community to tuber yield and quality.

Zebarth explains, “At two sites in New Brunswick, we have done a detailed study on spatial variability. In each field we have about 150 sampling locations in a grid. The original focus of this research was the spatial variability of yield and soil properties. We are going to choose one of those fields and determine the microbial communities as well.” Goyer is very interested in seeing how the communities differ between the high-yielding and low-yielding areas of the field.

Next steps
In the next few years, Goyer and Zebarth are planning to look at how other agricultural practices affect microbial communities. In particular, they want to assess the effects of growing mustard.

“Mustard contains compounds called glucosinolates that break down in the soil to form isothiocyanate, which is a biofumigant that can change the microbial community. Also, mustard normally has a lot of organic matter that is returned to the soil. The biofumigation and the residues themselves make a huge change in the community and it is thought to help control diseases,” Goyer explains.

“We want to better understand this because in New Brunswick it seems that Verticillium wilt might be part of the cause of lower potato yields. We’d like to see if mustard or other high biomass crops can change the community enough to displace the Verticillium pathogen in those fields.”

As well, the researchers are working on tools for high-throughput quantification of key pathogens. “That’s where I want to go because I find that we’re missing part of the picture at the moment,” Goyer says. “In the long run, I’d like to be able to determine what the microbial community in general is doing and what the major pathogens are doing. Those are the two critical pieces of data.” Although methods to identify specific pathogens are available, they are time consuming if there are many samples that have to be analyzed for multiple target species.

Looking ahead, Zebarth says, “We are in the really early stages and we have a long way to go. But the technology is advancing. People are talking about, at some point, being able to have a little chip that you can take into the field and analyze DNA. So maybe in a decade or two you’ll be able to characterize your microbial community right in the field and be able to say this field is great or this field is not so good, and to say which practices would help.”