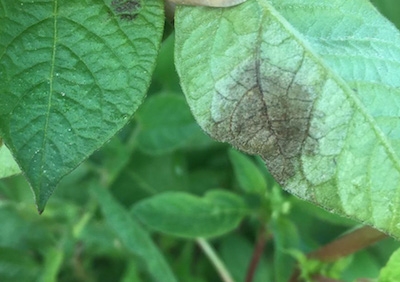 Photo of a US 23 strain of late blight lesion on a leaf.

Late blight has been confirmed on potatoes in Wood County, Wisconsin, on July 17, according to Amanda Gevens with the University of Wisconsin-Madison’s department of plant pathology.

Gevens described that sporulation was present, but light on most leaves, and lesions were quarter-sized on upper leaves.

Earlier this week, spore traps in Simcoe and Dufferin counties in Ontario, detected low levels of late blight DNA. Ontario potato specialist Eugenia Banks emphasized that A&L Laboratories – who conduct the PCR tests for the spore traps – have “state of the art PCR equipment capable of detecting very small amounts of late blight DNA,” even a couple of spores per filter.

To this date, late blight has not been found in Ontario. Banks said Ontario is experiencing variable weather across the province with some areas receiving rain and other areas requiring irrigation. In Simcoe County, “irrigation has been the order of the day,” according to Banks. Irrigation provides favourable conditions for the development of late blight.

Even though only trace amounts of late blight DNA were found in the spore trap filters, for Banks, “a few spores is reason to worry.”

In Wisconsin, a sample has been collected and delivered to the UW-Madison vegetable pathology lab where a technician can determine which clonal lineage, or strain, of late blight it is. Currently, the strain US-23 is the most commonplace in North America. The tests will also help determine the strain’s mefenoxam resistance status.

Mefenoxam, also known by trade names Metalaxyl-M or Ridomil Gold, is a fungicide for late blight. The strain US-23 is still susceptible to mefenoxam-based fungicides, but a new mefenoxam-resistant strain of late blight, US-25, was found in tomatoes in August 2018.