A Norfolk County grower has found a few Envol plants infected with late blight, according to an update from Eugenia Banks, Ontario potato specialist, on Aug. 26, 2019.

The disease is under control; the affected plants were destroyed and the field sprayed with Ridomil plus Bravo, according to the report. Most of the reports of late blight from the United States have been US 23, the tomato strain.  US 23 is, so far, sensitive to Ridomil.

“There are still many fields in the province that are green and may need three weeks to reach the finishing line,” Banks says. “It is critical to keep your fields free of late blight at the end of the season.”

Earlier in August, late blight was detected in six fields in southern Idaho, where the weather is typically dry and irrigation is required for potatoes. “This sort of weather is not favorable for late blight, so it came as a surprise to find six fields infected, all with US 23, the tomato strain,” Banks reported. This discovery begs the question: is the late blight pathogen adapting to warmer, drier weather? Banks says only time will tell, but fungi, bacteria and insects probably have genetic “ammunition” that allows them to adapt quickly to the changing environmental conditions.

Meantime, monitor fields closely, Banks advises, especially risky areas in fields, such as low-lying areas that tend to be wet for long periods after rainfall, as well as compacted areas, rows close to tree lines and field edges along creeks or ponds. Pivot centre points and pivot wheel tracks require a careful eye as well; look closely at the plants under the first tower of centre pivots. “This area remains wet longer than areas farther out on the boom,” Banks says. “Also, wheel track areas usually remain damp or wet after other parts of the field have dried up. 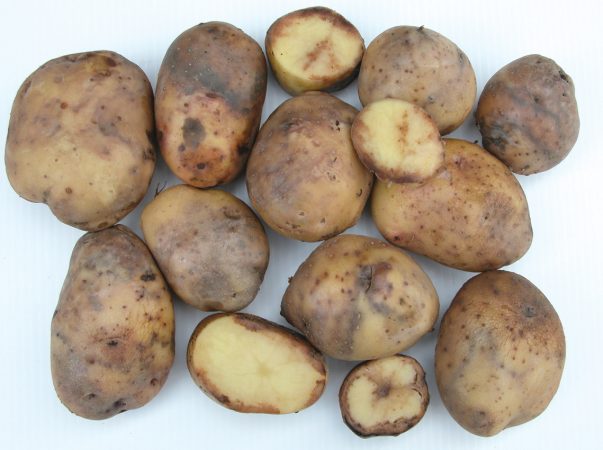 She also reminds growers to check weedy areas, windward sides of fields (as wind-borne spores may blow in and infect here), and any area that is protected from the wind where leaves tend to remain wet longer.

Finally, Banks reminds growers to keep fields protected with fungicides specific for late blight. Add Kocide or Parasol to the tank mix to reduce the risk of tuber infection.