When growers from across Canada sent tubers to be tested for Fusarium dry rot, many of them received an unpleasant surprise. The testing found that a substantial proportion of the samples were contaminated with fungicide-resistant Fusarium.

The tests were part of a study conducted by Dr. Rick Peters of Agriculture and Agri-Food Canada in Prince Edward Island. What’s concerning about these Fusarium samples is that they were resistant to thiabendazole and fludioxonil, active ingredients in some of the most routinely used potato seed treatments and fungicides.

“It became quite an issue here in Eastern Canada for some growers’ operations,” Peters says. “It moved onto the front burner when we saw some of the really serious losses right from the get-go, when growers were planting their crop. In some cases, it caused significant issues with seed decay and stand development, obviously resulting in yield suppression.”

Peters’ research, which was funded by the Prince Edward Island Department of Agriculture and Forestry and the Alberta Crop Industry Development Fund, found that potatoes from Prince Edward Island and New Brunswick are most likely to host resistant Fusarium strains. But that doesn’t mean that western producers can rest easy; potatoes from all provinces as far west as Alberta had resistant strains.

“There’s perhaps a higher incidence in the east versus the west,” Peters says. “We’ve been doing these surveys for over a decade now and you can see the incidence increasing over time and really becoming national in scope. So we have seen pretty much a national spread of this resistance phenomenon across the country.”

In his most-recent 2012 seed survey, Peters found five species of Fusarium that cause seed decay and dry rot. Of these species, the large majority of isolates of Fusarium sambucinum was resistant to either thiabendazole or fludioxonil, with several isolates being resistant to both active ingredients. This is troubling because F. sambucinum is the most common cause of dry rot. And when it came to resistance to fludioxonil, all but one of the 165 isolates of the species Fusarium oxysporum were resistant to the fungicide.

It’s the higher adoption of mancozeb products in the west that explains, in part, the lower apparent incidence of resistance in the region, says Peters. Resistant strains of Fusarium may be common on the prairies, but might be masked by agronomic practices.

While alternative seed treatments can help combat resistance in the short term, Foster notes that on their own, they aren’t a sustainable long-term solution without broader disease- and resistance-management practices.

Fusarium is both seed and soil borne. Given the fact that the seed is the primary source of infection and the complexity of managing the disease in the soil, Foster says, controlling the disease on the seeds is the most feasible approach.

The fungus can spread between tubers during seed cutting, handling or during planting. Seeds inoculated with fungicide-resistant Fusarium will produce a patchy potato field with poor vigour. The infected seeds spread inoculum to the surrounding soil, where it infects other tubers through wounds in the skin. And so the cycle continues.

To manage the spread of disease before planting, check your seed potatoes for signs of dry rot, including shrivelled tubers with lesions on the outside and light to dark brown dry rot with cavities filled with fine mycelium strands on the inside. Remove any diseased tubers.

It’s also important that the cut seed be given the opportunity to heal quickly. To speed this process, warm the tubers before cutting them. Also, be sure to keep your cutting equipment sharp, and clean it often and thoroughly with a disinfectant. After the seeds have been cut and treated with an appropriate seed treatment, store them in well-aerated bins for no longer than 10 days. And, as far as possible, ensure the seeds are planted into soil at a temperature that will promote rapid germination.

After harvest, the tubers are also at risk. The disease spreads when tubers are bruised or wounded during harvest and handling and come into contact with contaminated soil or equipment. So here again, prompt wound healing is important in minimizing disease spread and optimizing storage longevity and quality. Healing can be promoted by providing proper aeration, followed by storage in lower temperatures.

Peters advises against relying on just one mode of action, regardless of the disease. At the same time, he says, it’s important not to reject some active ingredients outright. For instance, Fusarium may be resistant to fludioxonil, but this active ingredient is still a powerful agent against silver and black scurf, and stem and stolon canker. So it’s still a viable disease control tool; however, it needs to be combined with other chemistry appropriate for the control of resistant Fusarium.

Overall, Peters warns against over-reliance on just fungicides and seed treatments in disease control. “There’s starting to be a laundry list of resistant pathogens,” he says. “It’s becoming an issue in a lot of areas of potato production. So we have to be conscious that these new products aren’t put at risk of resistance too. That’s what makes these integrated cultural practices so important.” 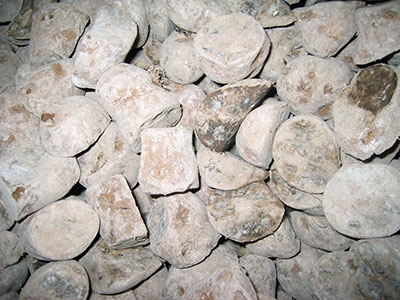 Dr. Rick Peters’ 2012 survey found five species of Fusarium that cause seed decay and dry rot. When growers from across Canada sent tubers to be tested for Fusarium dry rot
Print this page