Canadian research scientists are working on a unique project to identify the millions of bacteria in soil with the aim of lowering management costs for potato growers. 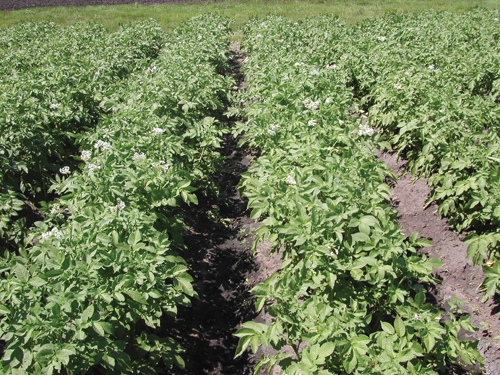 Growers are being challenged increasingly by rising costs Canadian research scientists are working on a unique project to identify the millions of bacteria in soil with the aim of lowering management costs for potato growers.

The researchers are using DNA technology to develop diagnostic techniques for soil health indicators. The purpose is to use those natural processes to more rapidly develop and rebuild the soil structure and microbiology to the point at which farmers could reduce their reliance on chemical fertilizers and other costly inputs.

The idea stems from work conducted by Dr. George Lazarovits, a research scientist at the Agriculture and Agri-Food Canada research station in London, Ontario. Dr. Lazarovits is one of the leading researchers on the use of byproducts of animal production, such as meat and bone meal, feather meal, and poultry and swine manure, as agents that effectively reduce soilborne plant diseases. The concept, known as suppressive soils, makes use of nutrients to manage soilborne plant parasites, thereby giving farmers alternatives to fumigants when disease resistant cultivars are not available. Interest in the subject is growing because fumigation is being constrained by increased costs, urbanization and the negative environmental impacts of urbanization. As for cultivars, resistant genes to soil-borne pathogens are often not available for many crop species.

Part of Lazarovits’ work required identifying the impact of the nutrients on the micro-organism community in the soil. He says people wanted to know if the byproducts were helping the beneficial microbes. “The big problem, of course, is who the good guys are?  A simpler question is, ‘who is there at all.’ It has always been my interest to find out who lives on the root of a plant and who is in the soil,” he explains.

Two different sources have inspired his research ideas: grafted horticultural plants and sugarcane production in Brazil. Commenting on the former, Lazarovits says grafted plants, such as tomatoes, eggplants, cucumbers and watermelons, have been a remarkable replacement for the fumigant methyl bromide. “When you take a commercial cultivar of a tomato, for example, and you put it on to an older, more primitive rootstock, you get this incredibly productive upper part of the plant.”

He suspects that there must be something in the older root systems that is giving the commercial plant new vigour. “They require less fertilizer, less water and fewer herbicides because they can tolerate a lot more stress in the form of heat. And they’re resistant to pathogens.”

While potatoes cannot be grafted, Lazarovits says researchers can examine how the soil is helping the grafted plants and they can determine how they might increase the vigour of potatoes in a similar fashion.

In addition to searching for clues in grafted plants, Lazarovits is also interested in examining the research in Brazil, where the country turned to producing ethanol from sugarcane to replace the importation of oil in the 1970s.

Start with low-fertility soils
With the idea that cost of production had to be low, Lazarovits says the scientists went to the poorest farmers they knew: those who could not afford to use any fertilizer, and screened the varieties that were grown in the low-fertility soils. He says they found cultivars that produced good yields with minimal input costs. After the scientists put the cultivars into tissue cultures to eliminate viruses and planted them in the fields, Lazarovits says they created another problem. “These plants did not grow very well after they put them into tissue culture. They discovered that inside these plants were about half a dozen bacteria in very high populations. The tissue culture eliminated these bacteria. When they put the bacteria back into the plants, they grew normally again.”

He adds that Brazilian growers only use about 50 kg of N fertilizer per hectare (44.6 lbs per acre) whereas American farmers who grow different sugarcane clones use about 350 kg of N per hectare (312.3 lbs per acre). “So there is a significant reduction in the production cost because of that.”

The examples of the sugarcane and the grafted plants underscore the assertion that it would be advantageous to know “who” is in the soil. In his effort to identify the millions of bacteria in the soils, Lazarovits is working with Dr. Sean Hemmingsen of the Plant Biotechnology Institute, which is part of the National Research Council in Saskatoon, Saskatchewan. Dr. Hemmingsen has developed a DNA technology that Lazarovits says can produce a fingerprint of all the organisms that may be present in the soil. “It’s new technology that has never been done before; anywhere in the world.”
The researchers have analyzed two Canadian soils; a sample from Prince Edward Island and one from Ontario. They examined the organisms that are living on the roots and the ones that are living in the soil close to the roots. Lazarovits says they found that organisms on the roots are vastly different from the organisms in the soil. “There is some selection of the microbes that are on the root versus what’s in the soil. And we can now identify those guys, pull them out and potentially test them for what benefits they may have for the plant.”

Ultimately, Lazarovits says he is trying to find a low-cost management system for growers that will allow them to shift their soils into what he calls highly productive ecosystems. “And this, hopefully, will speed up the rate: that we can maybe identify technologies to make soils more fertile and create those kinds of ecosystems where the growers have to put in less fertilizer, they can use some of the microbes that fix nitrogen and release phosphorous and all those things.”

As for the next stages of his research, Lazarovits says there is the potential to collaborate with Canadian potato breeders who have varieties that grow well on low-fertility soils. He suggests that they will examine them for the presence of beneficial soil organisms. Lazarovits is also trying to secure funding for the research through the federal government’s “Growing Forward” program. The horticulture industry is applying for a potato cluster that would also involve research into late blight and potato breeding. Lazarovits’ group is focusing on soil health. “We’re looking for soil health indicators for potatoes; those soils where growers get good yields year to year, and they can regulate their input costs with no risk of disastrous crop losses.”

Given that the funding is based on three years, Lazarovits hopes his work, if the proposal is approved, would be incorporated into commercial production within that time frame.