A virologist with Agriculture and Agri-Food Canada (AAFC), in collaboration with breeders, has developed a way to speed up marker-assisted selection in the effort to identify potato virus Y (PVY) resistant material. The method – known as high-resolution melting markers, or HRM markers – has been used in other breeding programs, but Xianzhou Nie, a research scientist at the Fredericton Research and Development Centre, has perfected it so it can be used to select genetic material that is extremely resistant to PVY infections.

As most growers know, PVY infection can devastate a crop, making the choice of seed important. Severe PVY pressure can cause as much as a 90 per cent yield reduction. Choosing seed that is PVY free, therefore, is the first step towards minimizing losses. However, aphids can also transfer the disease, which adds to the workload and cost of production when growers have to spray mineral oil to ensure the spread of aphid-transmitted PVY is minimized. The best solution from economic and environmental perspectives would be to have potato varieties that are resistant to PVY, which would also eliminate the spread of the disease. Nie hopes this research and development of a faster method to identify PVY-resistant and susceptible parent material and progeny will vastly improve and fast-track potato breeding.

“Using HRM markers, we are identifying efficiently and accurately, markers associated with genes controlling PVY resistance in potatoes,” he explains. “If a potato inherits the resistance gene, it will not develop the disease. This will be very useful for breeders making selections in breeding programs.”

Conventional breeding programs can screen thousands of crosses; it isn’t until the most promising are faced with PVY pressure that breeders know for sure if they have a potential disease-resistant variety. Traditional screening for PVY resistance is carried out mainly in the greenhouse by inoculating each and every offspring/progeny plant with the virus and then waiting for symptoms to develop and laboratory detection of PVY to be completed. By using the HRM marker technique (a procedure carried out in a laboratory as well), breeders will not only be able to identify and select parental material that is PVY-resistant or has “extreme resistance” prior to making crosses, but they will also be able to screen for progeny/offspring inheriting the resistance efficiently in the laboratory setting.

Nie estimates that if 200 plants are bred using traditional selecting methods involving PVY inoculation in the greenhouse, it can take two to three months to determine which progeny, if any, are resistant to PVY.

“Using the HRM marker method, we can screen for PVY-resistant plants in two to three days,” he says.

By determining the value of using HRM markers in PVY screening, Nie says that in the future the method could be used to identify other diseases, or to isolate desirable traits. He says using HRM marker technology allows a researcher to run 96 samples in three to four minutes after amplification of the DNA pieces containing the markers. There’s no question the potential for breeding programs in the future is enormous.

“In our breeding program at Agriculture and Agri-Food Canada, we anticipate the method being implemented for screening for disease resistance to speed up the selection process,” Nie says. Because the method was perfected at a public institution, it is not protected by copyright, which makes it accessible to any breeding program in the world. “We have provided the technology and now anyone can choose to use it.”

Early in 2016, this new form of PVY resistance identification was tested on some of the latest clones bred at AAFC. The presence of the HRM markers that indicate PVY resistance was detected, which signals the potential varieties will be PVY-resistant. The breeders are now looking for germplasm that would have extreme resistance to PVY because those markers are present. Nie envisions a day when PVY-resistant potato varieties will be common, giving growers one less disease to worry about. 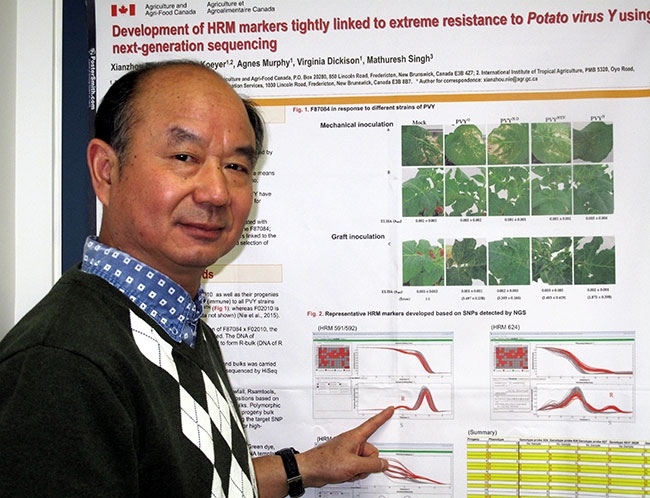