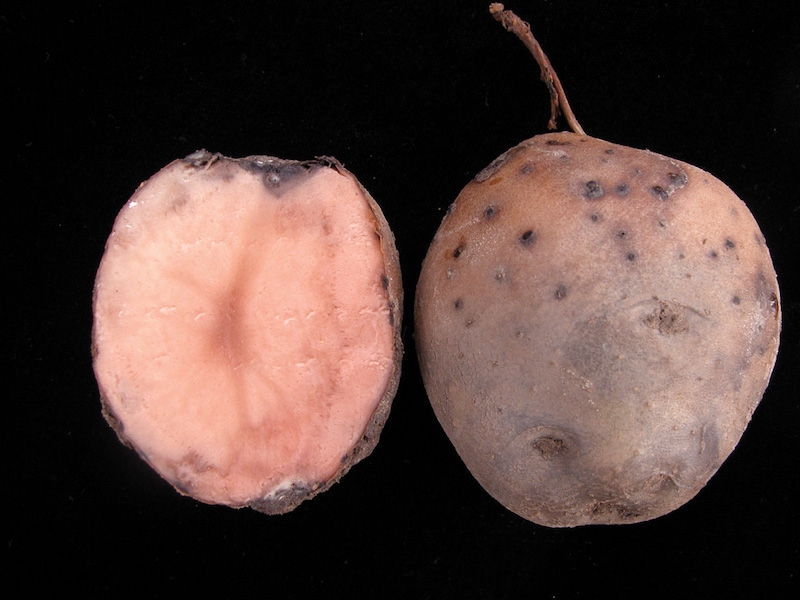 A fungicide co-pack containing Orondis Gold Potato and Ridomil Gold will be available in spring 2019 to to suppress pink rot and Pythium leak. Ontario potato specialist Eugenia Banks says the registration for Orondis is for in-furrow application, despite pink rot usually developing at the end of the season. Banks consulted researchers to see if an Orondis fungicide application in the middle of May will still be active in September.

Neil Gudmestad, professor of plant pathology at North Dakota State University, has conducted research on pink rot and says the fungicide is still active in September, despite a May application. “Orondis is very effective against pink rot even if applied in-furrow in the spring.”

Jeff Miller, a PhD. researcher at Miller Research based in Idaho, agreed with Gudmestad. Miller tested the fungicide last year and got good control, not just suppression, of pink rot at harvest time. Miller will be presenting his data on the effect of Orondis against Pythium leak at Ontario’s Potato Conference on Mar. 6, 2019 in Guelph, Ont.

If Orondis is used in-furrow it cannot be used as foliar spray to control late blight. This is a resistance management strategy to keep single-site fungicides like Orondis effective for an extended period of time, according to Banks. Growers deciding between applying the fungicide in-furrow or as a foliar application should consider several factors such as how susceptible planted varieties are to pink rot, field history, and extent of crop foliage.