Outbreaks of Phytophthora nicotianae, a disease “cousin” of late blight, have been recently detected in parts of New York and Pennsylvania, according to the USABlight project working out of North Carolina State University.

“Plants infected with P. nicotianae can exhibit symptoms very similar to late blight and can be difficult to distinguish,” the USABlight report stated.

As of July 17, 2019, there are no reports of late blight in potatoes or tomatoes in the Pennsylvania region, according to Pennsylvania State University Extension’s vegetable disease update.

The disease update states that multiple reports of “late blight-like symptoms” have come in, but the symptoms have been revealed to belong to a foliar blight caused by P.nicotianae. The foliar symptoms “bear a strong resemblance to late blight.”

Penn State Extension researchers write that both diseases come with irregular water-soaked lesions that are grey-green, but for P.nicotianae, the center of the lesion can be more tan in colour and the disease lacks easily visible sporulation on the underside of the leaf when compared to late blight.

Late blight lesions on the upper and lower leaf of a tomato plant. The white sporulation is a distinguishing characteristic between the two diseases. Photo courtesy of Beth Gugino, Penn State.

Ontario potato specialist Eugenia Banks added that P. nicotianae lesions do not produce as much mycelium and spores like those of late blight. 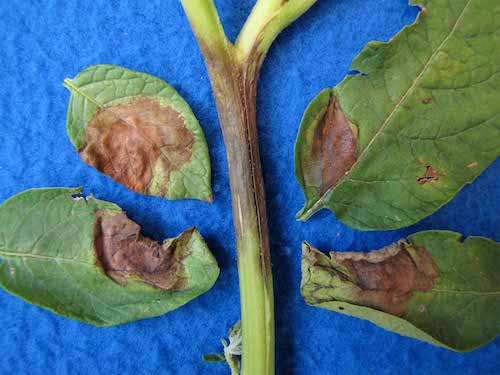 Lesions of P. nicotianae on a potato leaf. Photos courtesy of Eugenia Banks. 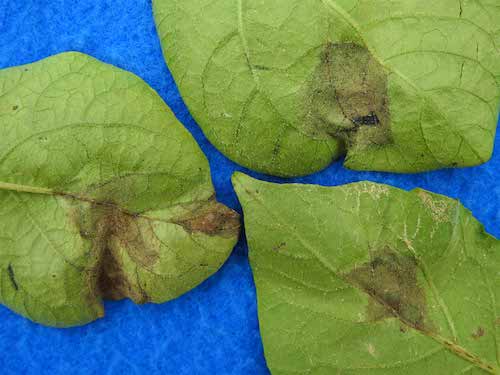 The lesions can be confused for late blight lesions, which appear similar except for white sporulation.

The disease, P. nicotianae, is soil-borne and attacks all parts of the plant including the roots, according to Banks. Infected plants are usually found in low, wet spots within fields. The disease also favours warm, wet weather, contrasting late blight which favours cooler conditions, according to Penn State Extension researchers.

In terms of control, Banks says that fungicides registered for late blight also control P. nicotianae. Penn State Extension researchers have noted that there have been some cases of P.nicotianae with resistance to mefenoxam-based fungicides, but that other fungicides targeted for oomycete pathogens (of which late blight is included) still provide some level of efficacy.

Despite all its similarities to late blight, P.nicotianae does not produce abundant spores and therefore doesn’t spread as easily or as rapidly as late blight does, especially under dry conditions.

2 Comments » for “Cousin of late blight” detected in eastern U.S.