Colorado potato beetle pressure was relatively low in Canada in 2009 compared with some years, but growers must stay aware to both control populations in their fields and effectively manage developing resistance to Group 4 insecticides. 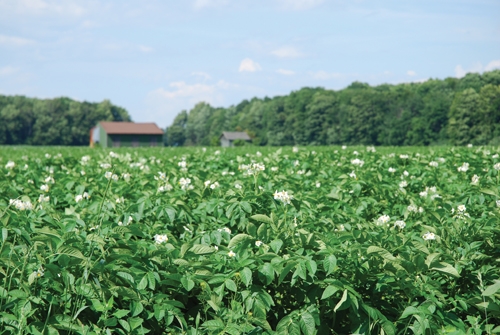 Dr. Jeff Tolman, an integrated pest management research scientist based at Agriculture and Agri-Food Canada’s Southern Crop Protection and Food Research Centre in London, Ontario, says the relatively light CPB season was due to a cool, wet spring last year. “However,” he says, “just because 2009 was a low pressure year for the pest doesn’t mean 2010 will be.”
What is more, Tolman observes that although CPB resistance to Group 4 insecticides was no worse in 2009 than in 2008, “it’s not ever going to go away.”

Resistance is best managed with a multi-pronged approach. “Rotate your potato fields far away, a kilometre away if possible,” says Dr. Galen Dively, an IPM consultant and professor emeritus at the University of Maryland. “If the temperatures are low early in the season, CBP will not be able to fly and will have to walk, so putting your new potato fields even a half a kilometre away with a barrier such as a field of winter wheat in between can make a huge difference.”

Non-host crop barriers work better than some other types of barriers because beetles climb the stalks, find no suitable food, and are often too exhausted to push on.

In addition, Dively advises that if they are not already doing it, growers should begin co-ordinating rotational layout of fields with their neighbours (community or area-wide rotation).

Both diligent scouting and following spray thresholds are critical in managing Group 4 resistance, as is the rotational use of insecticides with different modes of action. “A Group 28 insecticide has a completely different mode of action than Group 4 (neonicotinoids), and is a very valuable resistance-management tool,” says Tolman. “Due to this mode of action, it does not show cross resistance to existing products.”

Philippe Parent, who conducts research at Les Patates Dolbec Inc. in St-Ubalde near Quebec City, agrees. “Coragen is very important to the grower in preventing Group 4 resistance,” he says. “We also like it because it lasts a long time, and insects stop feeding rapidly.”

Use of a Group 28 insecticide for resistance management
There are a number of factors growers should keep in mind in order to both fully understand what Coragen offers and to maximize performance. Scouting for this pest should begin on at least 30 plants per field as soon as plants start emerging. Early applications provide optimal control.

Although Coragen kills both larvae and adults, applications made at early larval stages provide optimal control. “Young larvae are the life stage most susceptible to insecticides,” says Jean Coulombe, an independent researcher based in Royal Ile d’Orléans, Quebec. “Adults are much hardier than larvae, so they’re harder to control. They’re also much more mobile on the leaf.”

However, spraying any insecticide during the CPB larval stage can coincide with or just precede a period of rapid plant growth. “It’s the same outcome for any non-systemic foliar insecticide,” says Tolman. “Group 28 products move quickly into the plant and have long persistence, lasting three to four weeks on the leaf, but if you’ve got very vigorous growth occurring, that new growth will not be protected. Another application may be necessary.” That is why, adds Tolman, “if you don’t have to spray when the plants are growing rapidly, you shouldn’t.”

“Residual control is maximized during periods of slow-to-moderate plant growth,” says DuPont representative Blair Fraser. “Only one application is often all that’s needed to control resistant or non-resistant CPB under these growth conditions.”
Good coverage at the highest recommended rate provides optimal control. Not all CPB are equally susceptible, a normal occurrence with insecticides. “With Group 28 insecticides you may have to use a high rate,” says Tolman. He also says, however, that “growers may not have to do the whole field. While scouting, you should be on the lookout for hot spots.”