The highest provincial increases in 2019 were observed in two of the Atlantic provinces, Prince Edward Island and New Brunswick.

The average value of Canadian farmland increased by 5.2 per cent in 2019, the smallest increase over the past decade, according to the latest FCC Farmland Values Report.

The 2019 increase follows gains of 8.4 and 6.6 per cent in 2017 and 2018, respectively, and becomes part of a five-year trend of softening growth in average farmland values.

“The days of sharp increases in farmland values continue to be replaced by more modest growth,” said J.P. Gervais, FCC’s chief agricultural economist. “Changes in commodity prices, uncertainty around global trade and some challenging weather conditions may be tapping the brakes on an otherwise healthy and robust Canadian agriculture industry.”

All regions of Prince Edward Island saw double-digit increases in farmland for a provincial average increase of 22.6 per cent in 2019. Photo courtesy of FCC’s Farmland Values Report 2019. 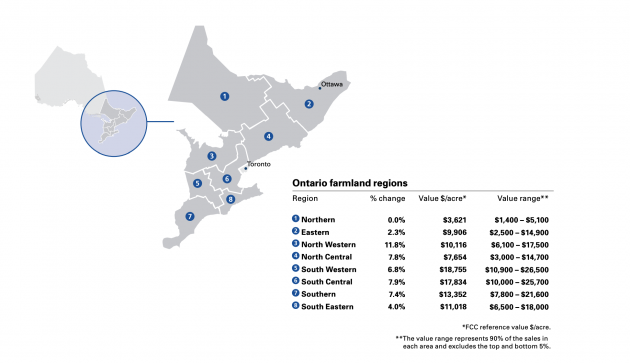 The average value of Ontario farmland increased 6.7 per cent in 2019. The North Western region had the most significant increase at 11.8 per cent. Photo courtesy of FCC’s Farmland Values Report 2019.

For the fourth consecutive year, there was an insufficient number of publicly reported transactions in Newfoundland and Labrador to fully assess farmland values. 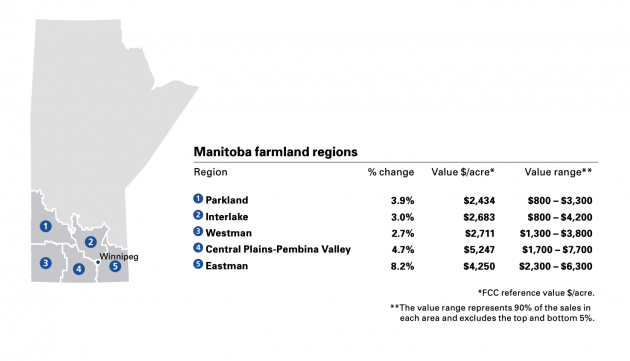 Manitoba’s average farmland values increased by 4 per cent in 2019, following a 3.7 per cent increase in 2018. Photo courtesy of FCC’s Farmland Values Report 2019. 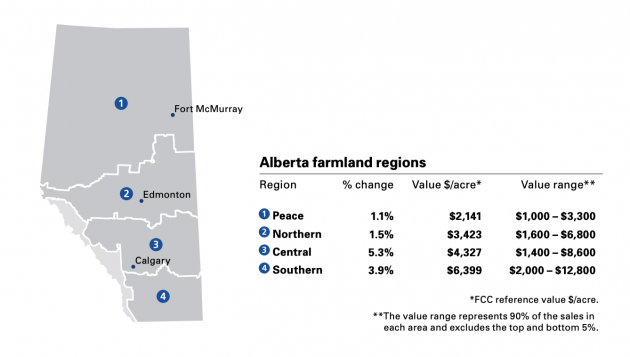 Potatoes in the southern region were the bright light in 2019 with an increased demand from the processing sector, which contributed to a 3.9 per cent increase in the average farmland value for the region. Photo courtesy of FCC’s Farmland Values Report 2019.

“Given the uncertainty, I expect farmers, ranchers and food processors to continue being careful with their investments,” said Gervais, encouraging producers to have and maintain a risk management plan that considers a broad range of possible economic changes, such as variable production, volatile commodity prices or disruptions to global trade.

This year’s Farmland Values Report reflects factors that influenced average land values and prices in 2019, prior to the COVID-19 pandemic. Any impact from the pandemic will be captured in future reports.