One day soon, you might be able to give your potato crop an extra boost from beneficial bacteria, thanks to some innovative studies by Ontario researchers. 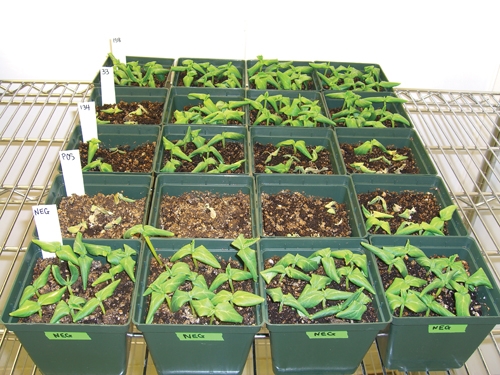 “Our whole goal is to find ways to reduce crop inputs of chemicals like pesticides or fertilizers, through biological methods,” says Dr. Amy Turnbull, a research scientist with A&L Biologicals Inc. in London, Ontario. A&L Biologicals is the research division of A&L Canada Laboratories, a private company specializing in soil, plant tissue, fertilizer and water testing.

Turnbull started investigating beneficial bacteria for potatoes in 2010. Her interest is in the bacteria found in the potato’s rhizosphere, which is the soil surrounding its roots, and its endosphere, which is the internal tissue of the roots.
The rhizosphere is a zone about 1 millimetre wide right next to a plant root. This zone is rich in compounds such as sugars and proteins that are released by the plant root into the soil. Depending on the exact compounds, certain types of microbes will flourish in a plant’s rhizosphere, while other types will decline. Similarly, the conditions inside a plant’s roots will favour certain species of microbes over others. Some of the types of bacteria that thrive in the rhizosphere or endosphere may help the plant, some may harm it, and some are neutral.

In her potato study, Turnbull’s first step was to grow potatoes in soil samples from potato-producing areas in Ontario and Prince Edward Island. Then she analyzed the bacteria from the rhizosphere and endosphere of these potatoes. She found several hundred different strains of bacteria, approximately half of which were unknown until now.

She explains, “In the past, researchers studying bacteria near the roots focused on those species that are easiest to culture in the lab. But the massive advances in DNA sequencing technology in the last five years now enable us to sequence the DNA of all the microbes from inside the root and from the soil around the root. So we’re finding bacteria that scientists previously didn’t know were there.”

DNA sequencing allows researchers to identify the types of bacteria in a sample and also to determine which types are the most abundant. It turns out that the easy-to-culture bacteria are not necessarily the most abundant types in the rhizosphere and endosphere.

Turnbull is concentrating on the most abundant types based on the hypothesis that those types likely have the largest
impact on plant performance. So she worked out how to isolate and grow those abundant bacterial strains in the lab.
Then, through lab and growth chamber experiments, she evaluated the strains in terms of several agriculturally significant behaviours. “We’re looking for bacteria that: produce phytohormones that enhance plant growth; provide nutrients,
either by fixing atmospheric nitrogen or by solubilizing insoluble soil nutrients like phosphorus, and supplying those nutrients to the plant; or produce antibiotics or other chemicals that control plant pathogens,” she explains.

So far, Turnbull has found 13 strains able to fix nitrogen and 14 strains able to solubilize phosphorus in lab experiments, and she is now evaluating their effects on potato plants growing in soils with low levels of nitrogen and phosphorus. She has also identified seven strains that are able to control specific fungal pathogens, such as Pythium or Rhizoctonia, in potato plants. And she has found 21 strains that produce hormones that can improve the growth of potato plants.
Using these promising strains, Turnbull is currently creating and testing different communities of beneficial bacteria to see how well they are able to establish themselves on and near potato plants, and to what degree they help improve plant health and productivity. Eventually she hopes to develop various ways to use the beneficial bacteria to enhance potato production, such as disease-suppressive compost, nutrient amendments and inoculants for seed potatoes.

Other bio-studies that could help potato production
Turnbull’s study is one of several A&L projects related to biological methods to improve potato health and yields. She notes, “We have a long-running field experiment to investigate different green manure treatments to see how they affect potato yield and two important potato diseases, Verticillium and scab. We also have some field tests in collaboration with growers to test different organic products for reducing the incidence of scab. And we are collaborating with a potato breeder from PEI to evaluate the performance of nitrogen-fixing bacteria on different varieties of potatoes.”
As well, A&L is working on a major effort to identify indicators of soil health for growing crops, including potatoes. The company’s aim is to eventually offer a service to farmers who want to know whether or not a treatment they have applied to their soil has enhanced beneficial bacteria.

Several interested growers are working with A&L to develop this concept. Turnbull says, “At present, if growers
apply some treatment to their soil, they don’t really know if they have changed the population of microbes in the soil or on the plants. So, after they have applied that treatment, they could pull up some of the plants in the treated soil and some from untreated soils. Then we can test those samples and determine if the treatment caused a shift in the bacterial populations or not.

“Right now we can just say if there’s been a shift. Our goal is, in the next year, to be able to say whether it’s been a good shift or a bad shift in terms of soil health.”

To carry out this type of bacterial research, A&L is developing a molecular method to track complex microbial communities. This method doesn’t rely on culturing microbes, so it avoids the problem that the most abundant bacteria are difficult to culture.

Turnbull says, “We have these ideas [for biological approaches to improving plant health and productivity], and we have the ability to track the entire microbial community [using this molecular method]. That opens the door for doing further studies.”

For instance, the company’s researchers have several studies that are looking for answers to their questions about bacterial communities, such as what roles do the different species in a community play, how do the bacteria interact with each other and with the plant, what is the purpose of those interactions, and what are the factors affecting which types of bacteria predominate in a community.

With the increased understanding of microbial ecology that could come from such studies, they hope to develop further practical applications of beneficial bacteria for enhanced production of potatoes and other crops.