It’s a first in Canada: the evaluation of a commercial aeroponic production system for seed potatoes. “We need to reduce the costs of production to remain competitive in the North American seed potato industry, and this technology has the potential to do that,” says Michele Konschuh, a research scientist at Alberta Agriculture and Rural Development’s Crop Diversification Centre South in Brooks, Alta., who led the technology evaluation project.

The technology under scrutiny is called Vital Farms Potato Incubator PIP-200, an aeroponic seed potato production system from NorthBright Technologies designed to optimize the yield and quality of seed potato mini-tubers. “We wanted to evaluate this system and its costs, and also determine the effect of light, potato variety and nutrient solution on the yield of mini-tubers,” Konschuh says. “We are just completing the last round of evaluations. Over one dozen varieties have been grown in the system.” The effects of the time of year and tuber size at harvest have been documented, but the configuration of their system did not allow for comparison of nutrient solutions.

Funding and support for the project was provided through the Alberta Crop Industry Development Fund, the Agriculture and Food Council of Alberta (a non-profit organization comprising representatives from across Alberta’s agri-food industry), Potato Growers of Alberta and several industry stakeholders.

Getting started
The PIP-200 arrived in Brooks in August 2012, and Konschuh and her team were soon hard at work on installation. “We got the frame assembled within two days, but overall installation proved to be much more time-consuming than expected,” she remembers. “We spent almost two weeks turning wrenches, running a rivet gun and installing the plastic ‘root bags’ that house the roots and return flow to the system.” When installation was complete in October 2012, a total of 17 hanging gutters were installed, each with room for 71 plantlets.

In the first trial, 14 varieties of seed potato plantlets were planted into 17 gutters. “In this trial, we were able to evaluate variety responses to the system,” Konschuh explains. “With the duplicated varieties, we evaluated the effect of harvesting two sizes of tubers (Shepody), the effect of insufficient humidity during plantlet establishment (Sangre), and the effect of delayed transfer to the system (Russet Burbank).” Harvesting of tubers began in November 2012 for the earliest varieties and continued at four- to seven-day intervals until mid-February 2013.

Konschuh found that plantlet survival was less than ideal for several varieties. “We think this may have been related to the type of fabric supplied to separate the root chamber from the tuber chamber, as well as to not optimizing the irrigation schedule for each variety,” she says. “There was only one zone supplied with the PIP-200, so all varieties were irrigated on the same schedule and got the same nutrients, so a comparison that way was not possible.” Exposing plantlets to low humidity prior to planting into the system had a negative effect. Approximately 30 per cent fewer tubers of marketable size were harvested from plantlets exposed to sub-lethal low humidity.

Konschuh and her team also found that harvesting larger tubers (25 millimetres rather than 20 millimetres in diameter) resulted in a reduction by about half of final tuber count. “As mini-tubers are sold by count rather than by weight, this is a significant finding,” she says. “We need more study to establish relevant pricing for different size classes on mini-tubers.” Delaying planting into the PIP-200 had no significant effect on the final number of tubers harvested.

Yield ranged from three to 10 tubers per plant in the first round. Although Konschuh says this is a good yield compared to current mini-tuber production levels in conventional potting mix, a yield of 10 to 30 tubers per plant was expected. (The company claims that the PIP-200 achieves tuber production more than 10 times greater than traditional methods and provides significantly larger tubers than generally available through alternative technologies.) To try to boost this, modifications to the fabric and the irrigation schedule were made for the second round of evaluation.

An open house for potato producers and other industry stakeholders was hosted Dec. 11, 2012. “We had about three dozen key industry people and feedback was generally positive,” Konschuh says. “Many people recognized that we would not meet the production targets proposed by the distributors. It was a good opportunity for people to evaluate the potential of this type of cultivation and comprehend some of the challenges.” She adds that others who couldn’t make the open house arranged to tour the facility at alternative times. “With this being the first of its kind operating in Canada, there is a high level of curiosity about the project.”

A sample of tubers from the first round of evaluation were planted in the spring of 2013 along with conventionally produced tubers to determine whether or not there were differences in field vigour.

Konschuh says the aeroponic mini-tubers compared favourably with conventionally grown mini-tubers, although some dormancy issues were evident as a result of the project timelines. A field day in August allowed growers to view the daughter tubers first hand.

Rounds two and three
Meanwhile, back in the lab in late February 2013, the PIP-200 was emptied, cleaned and disinfected for the second evaluation. “We set up the system again with fresh plastic and a lighter-weight fabric, with 12 varieties,” says Konschuh. “Several varieties were included in more than one gutter, allowing us to compare planting methods for root establishment and the effect of harvesting tubers at different sizes.”

Planting was completed in mid-April 2013, and Konschuh says both plant survival and root establishment were better than before. Yield ranged from six to 17 tubers per plant (surviving) in the second round. “Although this is a good yield compared to current mini-tuber production levels (one to five) in conventional potting mix, it still fell short of the 10 to 30 tubers per plant that was expected,” she says. Modifications to the greenhouse settings and the irrigation schedule were made for the third round of evaluation. As of December 2013, Konschuh and her team were finishing third round harvesting, a trial that included the use of integrated pest management and more nutrient adjustment. She says plant survival was again better than before.

Challenges
In the first round, some technical installation issues resulted in an unexpected number of alarms, but most have been sorted out. In the second round, some plants showed signs of stress and plant survival was still less than the 99 per cent expected. “In round three, we improved our pest management strategies and nutrients were being more closely monitored,” Konschuh says.

On top of the evaluations, Konschuh and her team also worked with the Canadian Food Inspection Agency to ensure that seed produced in the PIP-200 was certified. In addition, Konschuh developed a Quality Control Manual for the facility, which will be shared with interested growers to facilitate their adoption of this new seed potato production system.

Overall, Konschuh stresses the significant learning curve that’s present when one moves from a potting-mix-based production system to an aeroponic one. She calls her learning experience “humbling” and cautions growers to “allow for some growing pains and significant hands-on monitoring of the crop.” 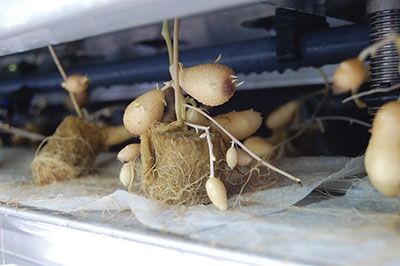 Konschuh has found aeroponic mini-tubers compared favourably with conventionally grown mini-tubers. It’s a first in Canada: the evaluation of a commercial aeroponic production system for seed potatoes.
Print this page