This article was republished from a 1999 article in Top Crop Manager.

The basic principles of potato storage have not changed much over the years. The computer age has allowed growers to more precisely control their humidity and ventilation operations, but the need to minimize disease, cool the pile, reduce shrinkage and preserve the crop until shipment remains essentially the same.

Every storage situation is different, according to John Walsh a former potato storage management specialist for the New Brunswick Department of Agriculture and now an agronomist with McCain Foods in Florenceville. However, he has a basic strategy that he shares with growers, which holds true for most situations: growers can adjust to suit their operation.

“There could be 1000 management situations,” Walsh explains. “But we've developed a strategy for storage management that begins with evaluating the crop for rot potential. For example, if a grower sees late blight late in the growing season, a flag should go up. If soil is saturated for more than 24 hours, another flag goes up. If there is rain during harvest — another flag. If rot is seen during harvest, that's another flag. If there are no flags, the grower can go ahead and start curing the crop. If a grower only has one flag, only a couple days of drying will be needed. If there are two flags, a couple weeks of drying may be necessary. If there are three flags, it would be best to turn the humidifier off, turn the fans on, and leave them that way because it could take more than two months to dry the crop. In the end, a little extra shrink is better than potatoes flowing out the door!”

The goal of all growers is to prevent rot from infecting the entire warehouse. Once taken care of, there are four steps to follow: curing, cooling, holding and removal of the crop from storage. If all are accomplished with no problems, a grower has completed the second stage of crop production, the first being the actual growing of the crop.

The curing process helps heal wounds and set the skin on the tubers, reducing any opportunity for disease to infect them. Walsh says the curing process is slightly different depending on how the potato is to be used. In the case of processing potatoes, he says, a colour evaluation must be made first and then the curing process can begin. “Tablestock and seed can cure for two to three weeks at 50 degrees F, while chip and French fry potatoes should cure for three to six weeks at 55 degrees F,” he reminds growers. “Once curing is over, growers begin the cooling process by dropping the temperature two to three degrees a week for tablestock and seed, and one to two degrees a week for processing potatoes.”

When cooling is complete, the potatoes are held at the recommended temperature for each type until delivery to processors or consumers. Processing potatoes may require warming to 55 degrees F for a few weeks before delivery to improve colour, otherwise the important thing is to maintain uniform conditions. Walsh says as long as rot is controlled, many problems facing growers will be manageable. However, he admits there is little growers can do to minimize the effects of rhizoctonia or silver scurf once they have infected the storage. He maintains growers need to concern themselves more with wet rots and dry rots because, with effective cooling, curing and holding, they can be minimized.

Some products will help control dry rot, but they have limited use due to resistance to the control product. Ross McQueen, a potato pathologist in the Faculty of Agricultural and Food Sciences at the University of Manitoba in Winnipeg, says thiabendazole has been effective on dry rot, but resistance is beginning to appear in Western Canada. “We're currently working with chlorine dioxide to control secondary infections that come from late blight,” he says. In this trial method, “The chlorine dioxide is delivered through the humidity system.” He says the method shows promise because it reduces the populations of the bacteria that cause rots that result from late blight.

Occasionally, growers try to fine-tune their storage operations to reduce disease by using multiple ventilation systems or opting for newer insulating materials, but the basic principle of good storage remains the same, says Walsh. “Work continues to develop expert systems to run the computers that manage the storage,” he says, “but the basics remain the best management system.”

A grower who has developed his own expert system is Keith Kuhl of Southern Manitoba Potato Company of Winkler, Man. He says after trying a number of computer environmental control systems, including “a cumbersome program” from a technology company in the U.S., he met with a local electrical company and developed his own system. “Ours is a much simpler system than any others that are on the market,” he says. “We determine a long-term goal for each warehouse and the computer is adjusted to maintain temperature and humidity until the planned shipping date.”

Kuhl says his company ships 12 months of the year and, as a result, his crop is managed with that in mind from the time it is planted. “In the cooling process, we know what our long-term plan is for that crop, so each bin may be treated differently depending on the market or delivery date.”

However, despite an efficient, easy-to-use computer program, Kuhl relies on regular visual inspections using temperature probes and his nose to sniff out any problems. “A good manager should rely on his sensory perception,” he says. “If you detect sour smells, you know you might have some problems in that bin.” For damage control, he may use the chlorine dioxide product, Purogene, in his ventilation system, but he would prefer to eliminate potential problems before this step is needed. This product recently received an extension of its 'emergency use' registration until June 2000.

Finally, the trick for successful storage is to never quit monitoring the warehouse. Take note of any 'flags' as the crop is being put into storage and adjust humidity and ventilation to minimize problems. Then, throughout the winter, maintain systems and monitor the crop to eliminate any surprises when the trucks start loading to take the crop to its final destination.

Kuhl says he is always ready to adjust his plans. For example, if a problem is found in a field slated for 10 months of storage, he may decide to move those tubers out of storage earlier than he had planned. He also says he selectively harvests to reduce problems. If the season has been wet and low areas are still wet, he may choose not to harvest those areas. He might also harvest them separately and store them in a different bin where the curing/cooling process can be adjusted to meet the needs of those tubers. If he sees a higher percentage of culls in a field, he may monitor that crop more diligently when it is in storage. He suggests keeping good records at harvest, noting the conditions of harvest and the pulp temperature of the potatoes going into storage and recording any disease potential.

“Storage management is like managing a completely separate crop,” says McQueen. “There are multiple factors growers need to take into account and manage the storage accordingly.” Savvy growers, like Kuhl, understand this concept and try to remain on their toes when their potatoes are in the bin although the basic storage principles remain the same.
January 10, 2019By Top Crop Manager 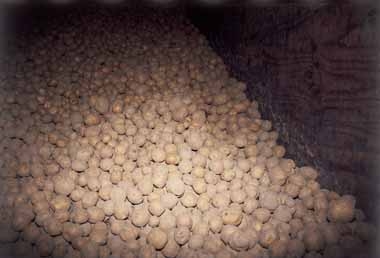